Happy Friday Marilyn fans!  It’s time for the weekly roundup of what’s new for lovers of the world’s most famous blonde.

Dust off those credit cards, because the Julien’s auction is off and running.  Online bidding on what will likely be the Marilyn auction of the century – and I can’t see this one being topped, even if we are only 16 years into the century – has begun on the Julien’s website.  The biggest item up for bids, the Happy Birthday Mr. President dress, already has a bid at $1,000,000.  The bidding opened on July 17th, and many other items already have bids as well.  It seems likely that many will go over their estimates, as Marilyn items commonly do, although we’re keeping our fingers crossed that some of the less wealthy fans among us can get our hands on a few items.  We’ll all be waiting to see if the dress can make history again.  Are you bidding?  We’d love to hear from fans who actually win something! 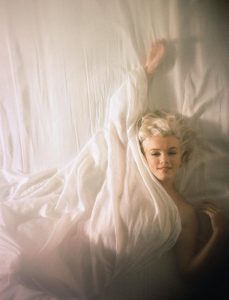 One of Kirkland’s dreamy images of Marilyn

Douglas Kirkland, who photographed Marilyn in 1961, has been making the news again as an exhibition of his photos makes the rounds.  This week he chatted with Australian Vogue about his night with Marilyn and the camera, as well as the other celebrities he caught with his lens.  Check out the interview I did with Douglas for IM a few years ago if you want to read more on this thoughts about Marilyn.

Speaking of Australia, Marilyn made big money for the city of Bendigo.  The big exhibition held there earlier this year made even bigger profits than expected.  The total income for the region as a result of Marilyn’s draw was announced this week; more than 140,000 people made their way to Bendigo for the show, adding up to a $13.2 million dollar windfall for the city.

That’s it for this week’s Marilyn news…have a great weekend, and don’t forget to get your bids in to Julien’s early!