Three Tales About Marilyn the Julien’s Auction Has Challenged

As Marilyn fans, we always get excited when we see a new picture or learn something new about Marilyn.  And for those of us who have made a study of her life, there may be nothing quite as exciting as seeing hard evidence surface that backs something you’ve suspected or believed for years.  Thanks to the Julien’s auction that’s already live online, we’ve got some new pieces to the constant puzzle that is Marilyn Monroe.  In fact, three fairly well-known stories about Marilyn’s life will have to be re-written thanks to evidence found in letters and scraps of paper. 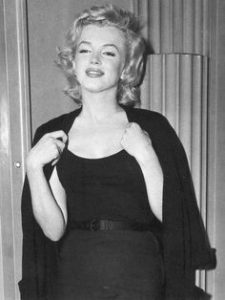 Marilyn gives a press conference after Arthur Miller announced their intention to marry.

The Tale: Marilyn was blindsided when Arthur announced to the press his plans to marry her.  The story goes that Marilyn was completely shocked when Arthur stated that she was to be his wife, but that seems unlikely. She may not have expected the announcement just then, but there has been some evidence uncovered in the past that indicates marriage plans were already in progress before the announcement.  Now there’s further proof that Marilyn and Arthur’s engagement wasn’t a surprise.  A letter from Arthur up for auction and addressed to Marilyn prior to the announcement clearly states Arthur’s desire to marry Marilyn on his birthday in October and discusses wedding plans.  That date was moved up in order for the two to get married before traveling to England so Marilyn could film The Prince and the Showgirl.  Since Arthur clearly didn’t know about that trip when this was written, the letter can be placed prior to the travel plans being made and well in advance of the public announcement.  So while it remains possible Marilyn was surprised Miller chose that moment to make the announcement, it’s clearly not true that the two weren’t already planning to get married.

The Tale: Marilyn had an affair with Some Like it Hot Co-Star Tony Curtis during filming.  This tale comes directly from Curtis himself, who further went on to claim the baby she was carrying during filming – and lost right after – was his.  Few Marilyn fans believe his claims, but this note written by Marilyn in response to Curtis comments at the time that “kissing Marilyn was like kissing Hitler” firmly dispels the notion.  It reads: “There is only one way he could comment on my sexuality and I’m afraid he hasn’t had the opportunity.”  That’s a mic drop on Curtis’ tales of an affair, not that they were believable to begin with. 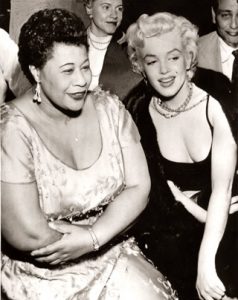 Marilyn Monroe and Ella Fitzgerald at The Tiffany Club in 1954.

The Tale: Marilyn was responsible for Ella Fitzgerald’s booking at the Mocambo, promised to be front and center every night, and followed through on that promise.  This well-known story comes directly from Ella herself in a 1972 interview for Ms. magazine.  Oh, this is such a lovely tale and so very in keeping with who Marilyn was, that it’s actually painful to see it proven false.  But a memo up for auction from Marilyn’s secretary Inez Melson makes it quite clear that Marilyn saw Ella at The Tiffany Club, didn’t in fact play a role in Ella’s booking at the Mocambo, and didn’t attend the shows there as she was going to be in New York at the time.  This evidence only backs up research already done by IM’s April VeVea, author of Marilyn: A Day in The Life, who previously dug up enough evidence to prove that it didn’t happen the way it went down in history.

It’s always amazing how in spite of the fact that Marilyn’s life has been analyzed and examined down to the most minute details, there are still new facts coming to light, and how even commonly accepted version of events can find themselves changed or even turned on their heads by a simple slip of paper that changes the story.  There’s always more to learn about Marilyn!