TGIF Marilyn fans!  It’s time once again for the weekly roundup of all the news in the Marilyn world!

Whether you collect them unopened or prefer to drink them, collectors of Marilyn wines will want to grab the recently announced 30th anniversary release.  Marking the 30 year anniversary of the winemaker’s most famous offering, Marilyn Merlot.  The wines are known as much for what’s outside as in the bottle, and this special new release features Marilyn on the set of There’s No Business Like Show Business.  You can get your own bottle directly from the winery here, or look for it at your local liquor store!

John Gilmore, author of Inside Marilyn Monroe, has passed away.  The book tells of his encounters with Marilyn; with whom she shared some commonalities.  You can read Marijane Gray’s obituary for Gilmore here as well as a previous interview with Gilmore for IM here.

A  new Marilyn exhibition will open in France on October 22nd.  Showcased at the Hotel de Caumont Centre d’art in Aix-en-Provence, the photography-focused exhibit will include approximately 60 photographs as well as multimedia pieces.  Marilyn – I Wanna Be Loved By You runs October 22, 2016 – May 1, 2017. 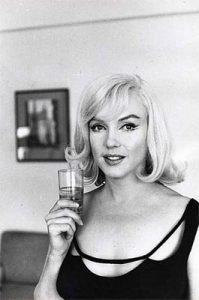 The Daily Mail posted a piece on the new Inge Morath photo book released on September 20th.  For those of you – like me! – who missed the news on this one, the book, called Inge Morath: On Style is available at Amazon.  The photography book features Morath’s photos of Marilyn on the set of The Misfits, along with other celebrities such as Jayne Mansfield and Audrey Hepburn.  Also included is a selection of her non-celebrity photos.  Marilyn fans will know Inge Morath as more than a photographer; Arthur Miller married her after his divorce from Marilyn.

Another new book on the subject of Natalie Wood had Marilyn in the headlines this week.  Natalie’s reflections on Marilyn and her death were the focus of Vanity Fair’s report on the book, along with several other news sources.  It’s always nice to hear one of Marilyn’s contemporaries speak on her, but we do think Natalie’s life is quite interesting enough without the media needing Marilyn’s name to grab attention.  Natalie Wood: Reflections on a Legendary Life is available at Amazon.

Ariana Grande became the latest celebrity to try her hand at Marilyn’s iconic song Diamonds Are a Girl’s Best Friend.  The singer put a bit of jazzy flair on her version of the song at a Tiffany & Co. (and how fitting) event in Beverly Hills on October 13th.  Grande has previously said she’s a fan of Marilyn, and was photographed in a very Marilyn-esque pink dress at the MTV Movie Awards this past April.  Check out her performance below and have a great weekend!