Happy Friday Marilyn fans!!!!  And what a day it is to be a Marilyn fan!  Last night’s historic Julien’s auction held a lot of surprises, so let’s get to the news! 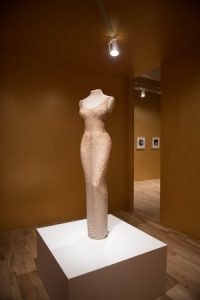 Biggest news of the night, the Happy Birthday Mr. President dress sold at auction for $4,ooo,ooo, more than double its 1999 sale price.  Marilyn fans broke into jubilation as word spread it had been purchased by Ripley’s.  the company bought a number of major items in in the 1999 Christie’s auction, but last night beat it all with the purchase of THE DRESS.  Word is, they also bought all of the JFK gala items up for bids, and plan to display them in their Los Angeles museum.  This is huge news for Marilyn fans – the dress, which has been hidden away for nearly 55 years, will finally be available for the public to see.

Meanwhile, Marilyn fans were surprised to see other items go lower than expected, such as the Some Like it Hot dress, which sold for $375,000, under the low end of the estimate.  While fans were shocked to see some items go low, some items that went high made jaws drop as well, such as vintage magazines and posters.

We’ll have a full report on the auction later, there’s still more to come!

Was there other Marilyn news this week?  Well, Robert Wagner has a new memoir out in which he discusses his encounters with Marilyn.  I Loved Her In The Movies: Memories of Hollywood’s Legendary Actresses is available on Amazon.

In are-you-kidding-me news, a British poll of 1000 people put Marilyn in second place to model Cara Delevingne as most iconic celebrity of the last century.  Seriously?  No accounting for some tastes…

That’s it for news this week…so far.  Good luck to everyone bidding in the rest of the auction!