Hi there Marilyn fans!  It’s Friday , and time to bring in the round up of the latest headlines featuring the one and only Marilyn Monroe.  As usual there’s a little of the good, the bad, and the things that make you go hmmmmm…..

Remember when we reported that our least favourite UK tabloid had run some pics of Marilyn showing a slightly rounded tummy with the story that she was pregnant with Yves Montand’s baby?  Well the National Enquirer, grandaddy of the fake news world, had to go them one better.  It wasn’t Yves baby, says the Enquirer, no sir.  It was JFK’s.  OF COURSE.  Sigh.  POTUS or Frenchman, either way the story is utterly false.  So, once again…No, Marilyn wasn’t pregnant in 1960!! 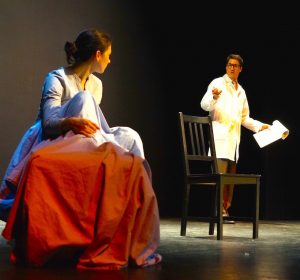 A brunette actress playing Marilyn in a new play

Ever the subject of fiction and fantasy, Marilyn appears again on the stage in the recently premiered Norma Jeane At the Payne Whitney Psychiatric Clinic.  The play, which earns our vote for Least Creative Title, covers – yes, you guessed it, her time at Payne Whitney.  In an effort to present her as “Norma Jeane” and not “Marilyn”, the play uses a brunette actress to play the part, so we can at least be spared another caricature.  Still, of all the parts of her life Marilyn would not have wanted to see on the stage, this would have to top the list.  We’re going to pass. 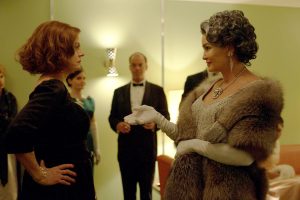 Marilyn will appear, or at least be mentioned, in the new FX series Feud: Joan and Bette, although no word yet how Marilyn’s appearance will be handled – either as a cameo or even just by name, or which actress will take the part if indeed there is one.  ES has the story on the slightly revised version of Joan Crawford’s hostility towards Marilyn as it’s portrayed in the series.

Are you ready for this week’s installment of Who Channelled Marilyn???  Yes, the ever-growing list of celebs who have earned a spot in the media’s obsessive attempts to point out every blonde wig and beauty mark grows once more….  This week we bring your former Disney star Dove Cameron and Lil’ Kim.  That last one we are definitely questioning.

Have a great week Marilyn fans!