Welcome to a new year, Marilyn fans!  We are back after a holiday hiatus to bring you a weekly run-down of Marilyn in the news. 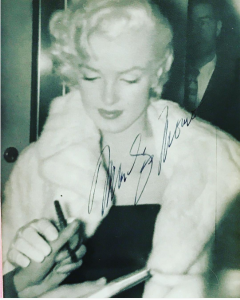 An autographed photo gifted to singer Thalia by her husband as part of an amazing Marilyn Christmas gift.

Did you get any Marilyn items for the holidays?  A couple of celebrities made headlines recently for their Marilyn-related holiday surprises.  Singer Thalia received a gift purchased at the November Julien’s auction from her husband Tommy Mottola – Marilyn’s handbag, lipstick, and face powder.  He also threw in a candid photo of Marilyn signing an autograph for a fan, autographed by Marilyn herself, from the Freida Hull collection.  Now that’s a gift any Marilyn fan would be over the moon to receive – major brownie points for Mr. Mottola!

Meanwhile, Khloe Kardashian bragged about her MM-related gift from her mother, Kris Jenner online.  She received two original Marilyn prints signed by photographers Richard C. Miller and Bert Stern.  Khloe is a big Marilyn fan, one of many in the famous family.

Another Marilyn-related production will be hitting the stage, this time at The Cutting Room in New York City.  With Love, Marilyn is apparently a musical performance based on Marilyn’s love affairs and will be performed on February 13th and 14th, 2017.  While the mention of Marilyn’s lovers raises our eyebrows – Marilyn fans know how much speculation and outright nonsense tends to appear in those tales – we’ll give the performance credit either way for donating proceeds to a women’s cancer charity.  Marilyn will be played by Erin Sullivan, who previously played her on the stage in the New Mexico production Marilee and Baby Lamb: The Assassination of an American Goddess.  That play was based on Lena Pepitone’s highly questionable accounts of Marilyn’s life. 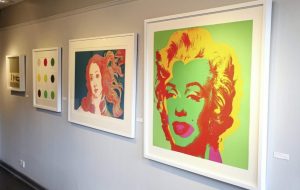 An original Warhol for sale in Belfast.

The Julien’s auction in November was the biggest news of 2016, but 2017 will see Marilyn on the block again.  Julien’s will be auctioning off remaining items in a June Marilyn auction.  If you missed out in November, there may yet be a  treasure to be had in a few months.  Details on what will be up for bids aren’t yet available, but will include some items that went unsold in November.

An Andy Warhol original screen print of Marilyn, signed by the author, is among a collection of original Warhols coming up for sale in Belfast, Ireland.  If you can’t afford the nearly $105,000 US dollar price tag on the Marilyn, you can at least see it on display at Gormley Find Arts if you’re in the Belfast area.

That’s it for this week…and here’s to a great Marilyn year!