Friday is here again, and with it our weekly round-up of Marilyn Monroe in the news. 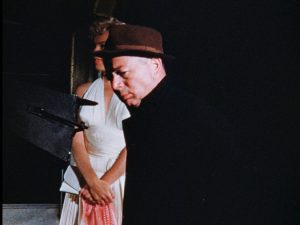 A still of Marilyn and Billy Wilder caught by Jules Schulback.

Big news today is the uncovering of gorgeous, clear, colour footage of Marilyn taken by a New York local during the filming of The Seven Year Itch in 1954.  Jules Schulback, a furrier in NYC, shot the footage of Marilyn in her terry robe on the steps and waving from a window.  He also captured Marilyn during the famous skirt-blowing scene on Lexington Avenue in the wee hours of the morning.  The footage drew a resounding gasp from Marilyn fans around the world.  The New York Times article regarding the footage shares a very short clip, although according to the article there are more than three minutes of footage.  Few outside the Schulback family have seen the footage in its entirety.  Here’s hoping we all get to see it one day! 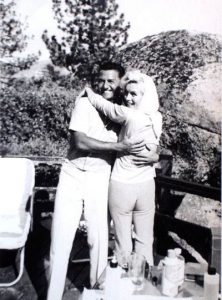 Marilyn with Buddy Greco in Lake Tahoe shortly before her death.

Sad news this week as musician Buddy Greco passed away in Las Vegas at the age of 90.  Greco is best known in Marilyn circles as one of those present during Marilyn’s last weekend in Lake Tahoe at the Cal-Neva Lodge before her death.  The photos taken that weekend are believed to be the last ones of Marilyn alive.  Greco, who hung with Marilyn’s friends Frank Sinatra and the rest of the Rat Pack, had a long and fascinating career that included a performance with The Beatles for Queen Elizabeth and multiple hits.  His passing was reported on January 10th, 2017.

Kate Upton is in the news in this week’s round of Who Channelled Marilyn?  (Yes, that’s what I have decided to call this portion of the news round-up from now on!)  The model earned the popular title from ET this week for a photo shoot that was part of the Love Advent Calendar.  It’s not the first time we’ve seen Upton in the category; she appeared on the cover of the 100th anniversary issue of Vanity Fair in 2013 doing a Marilyn-esque look.  She has also been caught in a very SYI-style dress in the past.

That’s it for the news this week – have a great weekend!