Hello Marilyn fans!  After an unexpected absence I am back on the beat for your weekly roundups of the Marilyn news!  Our girl is making headlines as usual – some of them ringing the “fake news” alarm bells!  Here’s what happened this week – and a few news items missed when I was absent! 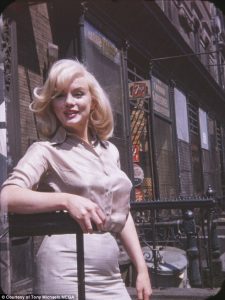 She wasn’t pregnant during these Misfits costume tests.

Pregnant Marilyn in 1960?  Not a chance, but the Daily Mail set off an avalanche of speculation this week with an article proclaiming it to be so.    The story had Marilyn fans quick to step up and argue its validity, fighting back once again against the tide of scandal and sensationalism that’s more interesting than the truth to so many.  Check out IM’s response to the story to get caught up on the latest in nonsense news.

Do you live in or near Philadelphia?  Then check out this one-night-only Some Like It Hot inspired dinner!  February 21st, at local venue Martha, you can enjoy a dinner inspired by the film and also a screening of what many considered Marilyn’s best film and biggest hit. 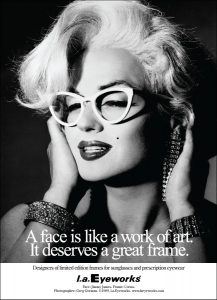 Marilyn will be featured in a series on blondes who passed away too soon.  The podcast You Must Remember This will look at Marilyn’s life and death along with Carole Lombard, Judy Holliday, and Jean Harlow in a series called Dead Blondes.  Check out the Rolling Stone interview with the podcast’s host.

It wouldn’t be the first time Jimmy James has been mistaken for Marilyn.  His images are regularly shared bearing her name, and we’ve even seen him as a Marilyn tattoo.  But this time an African nation has gone a little far and put his face on a stamp meant to feature Marilyn, and Jimmy has been forced to threaten legal action.  The image in question was part of a 1999 LA Eyeworks campaign, and one frequently mistaken for Marilyn.

Are you ready for a round of Who Channelled Marilyn???

Yes, there’s always someone out there being said to exude a little Marilyn…and this we have Bollywood actress Kangana Ranaut who did a Marilyn-esque performance for troops recently.  Once again, Courtney Stodden makes the list with a Grammy party look that had headlines mentioning Marilyn once again.

Have a great week, Marilyn fans!  We’ll have more headlines for you next Friday!