Hi there Marilyn fans!  Another Friday is upon us, and once again our girl continues to pop up in the headlines.

Marilyn’s name shows up in a recent article focusing on Hermione Brown, a female lawyer in a male-dominated field during Marilyn’s era, who represented a number of celebrity clients.  The article lists Marilyn among those who “lined up for her advice”.  She seems a fascinating woman!

An exhibit of rare Marilyn photos is underway in Berlin.  Although the exhibit started up on November 4th, the news has only just crossed our desk here at IM.  Gallerie Hiltawsky hosts the exhibit through January 14th. 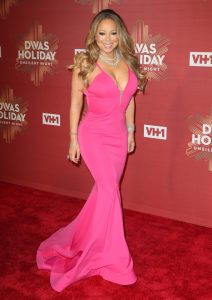 The New York Post shouted “You can own Marilyn’s sexy luggage” in a story on luggage maker T. Anthony of NYC.  The story states that they created a signature red and black luggage look for Marilyn while she was divorcing her husband – according to the story, she didn’t want her initials on it as he didn’t know yet.  Sounds a bit stretched to us, but I’m sure the luggage is lovely.

But, you are surely asking, which celebs have been accused of “channeling” Marilyn this week, probably in some obscure way???  Not to let you down, we have Mariah Carey in a pink dress, and Jennifer Hudson in a white one, neither of which really looks like Marilyn’s dresses.  All more proof that Marilyn’s name draws more clicks, even when another celeb is in the headline!

That’s it for this week!  The Roundup will be on hiatus for the holidays…see you in January!