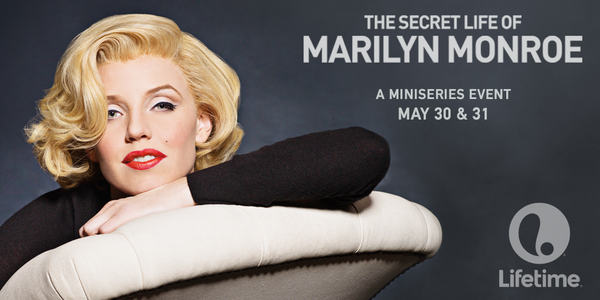 The US cable channel, Lifetime, is well-known – notorious, even – for producing a range of celebrity biopics, including Liz and Dick, a widely-panned film about the Taylor-Burton affair, starring Lindsay Lohan. Since then, features on Whitney Houston and others have been released. Despite critical disdain, Lifetime’s tabloid-friendly subjects continue to attract large audiences.

The channel’s decision to adapt J. Randy Taraborrelli’s 2009 book, The Secret Life of Marilyn Monroe, was announced in August 2014. The two-part mini-series was filmed in early 2015, and broadcast on May 30-31 (the eve of what would be Monroe’s 89th birthday.)

Laurie Collyer, who directed the acclaimed Sherrybaby in 2006, was chosen to helm the series, while two Oscar-winning actresses – Susan Sarandon and Emily Watson – were cast as Marilyn’s mentally ill mother, Gladys, and her friend, Grace, who later became legal guardian to the young Norma Jeane.

Kelli Garner, who began her career with performances in Bully (2001) and The Aviator (2004), has starred in a number of independent films, including Thumbsucker, Dreamland, Lars and the Real Girl and Taking Woodstock, as well as more mainstream movies like Man of the House and Going the Distance, and the 1960s-set TV drama, Pan-Am.

Stephen Kronish, who previously depicted Marilyn in another mini-series, The Kennedys, adapted Taraborrelli’s book for the small screen. The Secret Life of Marilyn Monroe begins with a scene showing Marilyn in her bedroom, dressing to impress – with the help of her loyal make-up artist, Whitey (Matthew Bennett.) She finally greets her guest, who has been waiting for hours and is ready to leave. Marilyn’s appearance in an orange Pucci top and white capri pants, and the faithfully recreated interior of her final home in the Los Angeles suburb of Brentwood, indicate that she is looking back on her life.

Marilyn’s conversations with Dr Alan DeShields (Jack Noseworthy), a psychiatrist, frame the narrative. DeShields is the only main character not drawn from Marilyn’s real life. However, Marilyn was actually seeing Dr Ralph Greenson almost daily at the time. His omission from the narrative is puzzling, as Greenson’s treatment of Marilyn is one of the great controversies of her later years, and a key factor in the mystery of her death.

With his youthful, almost Kennedy-esque good looks, DeShields more closely resembles one of the many reporters in whom she confided her thoughts, such as Richard Meryman, whose final interview with the star was published the day before she died. Therapeutically, the discussions with DeShields seem to serve little purpose, other than as a cue for revelations from Marilyn’s past.

The first episode focuses on Norma Jeane’s traumatic childhood, her mother’s breakdown, and Marilyn’s rise to fame. Grace is presented as a kindly, but ineffectual carer, seemingly more akin to Ana Lower, Grace’s elderly aunt whom Norma Jeane adored. Once again, a crucial figure is omitted from Marilyn’s story, and while it is understandable that not every individual can be represented, merging these two very different women obscures Grace’s complex character.

While undoubtedly fond of Norma Jeane, Grace was never fully committed to her care. It was Grace who briefly had the child committed to an orphanage, and sent her to live with friends and relatives when it was inconvenient to keep her. But because she is so blandly written, Gladys’s
resentment of Grace is never explained. A teenage Norma Jeane goes to the movies, and is mesmerized as a tarty usherette, Phyllis (Carolina Bartczak), flirts with a customer to sell him ices. It’s a fictional moment, but ‘Phyllis’ reappears in the second episode, looking on as a glamorous Marilyn arrives for a restaurant date with Joe DiMaggio.

After Norma Jeane marries Jim Dougherty, Gladys is shown visiting the couple after being released from hospital. That night, she wanders into their bedroom with a knife. An altercation ensues, and Gladys returns to the asylum. While Gladys may have threatened Grace with a knife several years before, no such incident occurred with Dougherty, who merely remembered his mother-in-law as quiet and strange. This echoes other descriptions of Gladys by those close to her. Sarandon’s portrayal of Gladys is compromised by this misleading scene, which needlessly conflates two separate events.

The remainder of the first episode focuses on Marilyn’s early career in Hollywood, and her relationship with Joe Schenck (Peter McNeill). It is alleged that after bedding Marilyn, Schenck secured her a walk-on part in Scudda Hoo! Scudda Hay! In fact, Marilyn had not met Schenck when she appeared in the film. Schenck is also given credit for her first important role, in The Asphalt Jungle (1950), although he was not involved, and while others may have helped her to campaign for the role, director John Huston said he chose her on the strength of her audition.

While there is no doubt that Marilyn and Schenck were close – she lived in the guesthouse of his Beverly Hills mansion for a short period – both repeatedly denied their relationship was sexual. Because of this exaggerated focus on Schenck, Marilyn’s later affair with Johnny Hyde (Tony Nardi), who had a far more significant influence on her career, seems redundant.

The first instalment ends with a quotation often misattributed to Marilyn – ‘Give a girl the right shoes, and she can conquer the world.’ In fact, this was said by Bette Midler.

The second episode relates the story of Marilyn’s marriages to Joe DiMaggio and Arthur Miller at lightning speed. One scene shows Monroe cheating on Miller with DiMaggio, but she was not in contact with him during her relationship with Miller. Her inability to have children is cited as the main reason for her divorces, with Miller accusing Marilyn of murdering their unborn child.

In fact, both men had children from previous marriages, and it was Marilyn who most wanted children. While she may have drank alcohol, smoked, and taken prescribed medication during her pregnancies, this was not known to be unsafe at the time. The real reason behind her miscarriages – a lifelong struggle against endometriosis – is never acknowledged.

Her career triumphs – such as winning a Golden Globe as the most promising actress of 1952, and later filming the iconic ‘subway scene’ in The Seven Year Itch – are featured in stark contrast to personal tragedies. Her early work with acting coach Natasha Lytess (Embeth Davidtz) is featured, but her studies with Lee Strasberg are never mentioned. In a confrontation with Darryl F. Zanuck (Barry Flatman), she seems near-hysterical – and yet, this led to her gaining creative control and a higher salary.

Marilyn is shown visiting Gladys in hospital on several occasions, and exhibiting textbook symptoms of inherited schizophrenia. But although Marilyn paid for her mother’s care, she did not visit her in later life. Patricia Traviss, head of the Rockhaven Sanitarium during Gladys’s long residency, has confirmed this in an interview with Dr Lois Banner.

‘Taraborrelli also has Rockhaven mixed up with a nearby sanitarium, Kimball’s, which was larger and had more Hollywood-connected patients,’ Banner wrote in her 2012 book, Marilyn: The Passion and the Paradox. ‘Marilyn wasn’t present when Grace discussed placing Gladys at Rockhaven, and Gladys was taken to Norwalk State Mental Hospital before Grace took her to Rockhaven some months later.’

In fact, Marilyn had only lived with Gladys briefly as a child, and due to her mother’s illness, their relationship was never intimate. While Marilyn suffered from depression and anxiety, she did not ‘hear voices’.

Her alleged affair with John F. Kennedy is depicted through the prism of her conversations with his sister, Pat Lawford (Tamara Hickey.) Marilyn is presented as hopelessly delusional, believing that Kennedy will leave his wife for her. But although it has since grown into a tabloid myth, her association with the president was actually very short-lived.

On her last night alive, Marilyn is shown swigging champagne. But she died from an overdose of prescribed drugs, not alcohol. Kelli Garner has clearly studied Monroe’s films carefully, imitating her breathy voice and capturing some of her girlish appeal. However, this screen persona was an illusion, and when used to depict the private woman, it stretches credibility. The pace is so rushed that Garner has little opportunity to develop her characterization.

The three-hour drama is accompanied by a forty-minute documentary, Beyond the Headlines: Marilyn and Her Men, which features contributions from Marilyn’s former friend, Amy Greene; biographers Sarah Churchwell, Lois Banner, Carl Rollyson, Richard Buskin, and Taraborrelli; and novelists Charles Casillo and J.I. Baker. But as the title suggests, the focus is on Marilyn’s relationships with famous men, and not her own achievements.

The Secret Life of Marilyn Monroe boasted a talented cast and crew, and has enjoyed more favourable reviews than other Lifetime biopics. Visually, it is quite faithful to Marilyn’s era, with good costumes and set designs – although CGI is overused in some scenes, making the backdrops seem unreal. Marilyn’s friendship with Whitey is under-explored, and an early scene showing Marilyn saving pigeons from capture in New York did not make the final cut.

As with the book that preceded it, the premise of focusing on Gladys, Grace and the other women who influenced Marilyn is intriguing. But Taraborelli’s major errors – in his portrayal of Gladys’s relationship with Marilyn, and her own emotional problems – are perpetuated by the script, which undermines the original perspective with inaccurate, gossipy depictions of Marilyn’s sexual affairs.

The recent success of HBO’s Bessie shows that TV biopics can rise above expectations. Sadly this cannot be said for The Secret Life of Marilyn Monroe, which takes its place among other mediocre portrayals of its subject (such as Blonde, the 2001 mini-series based on Joyce Carol Oates’ novel.)

Some would argue that Marilyn’s life story has been over-exposed, and when so many facts are contentious, no biopic can satisfy everyone. However, the mistakes outlined in this review could have been avoided with more diligent research. For those wishing to learn more about Marilyn, I would suggest watching a reliable documentary, such as The Legend of Marilyn Monroe, The Mortal Goddess, or Love, Marilyn instead.