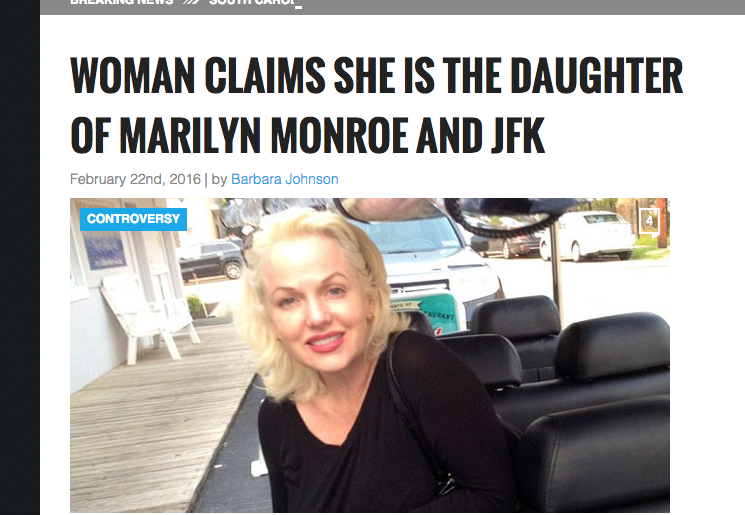 The website World News Daily Report has been making headlines recently for stealing a woman’s photo and attaching it to a hoax story that has gone viral .  They are also the same site that falsely claimed that a retired CIA agent confessed to killing Marilyn, and in that case also used a stolen picture to accompany their hoax. Despite facing potential legal action for slander and defamation from the woman they claimed had fourteen children by fourteen different men, they are at it again.

On February 22, they published a story titled “Woman Claims She Is The Daughter Of Marilyn Monroe and JFK.” They go on to say that a woman named ‘Gladys Baker Morris’, who was born in June 1962, has  launched court proceedings to prove that she is the daughter of the superstar and the President. The site claims that she has a birth certificate with the names Norma Jeane Mortenson and John F. Kennedy on it. A photo of the supposed ‘Gladys Morris’ appears at the top of the article.

However…the photo the site is using is not of ‘Gladys Morris’ but of actress Susan Griffiths, who has absolutely never made any such claims. Griffiths, a Marilyn lookalike and accomplished actress, has portrayed Marilyn on film numerous times, most notably on Quantam Leap, Nip/Tuck and the movie Pulp Fiction. She has long been a fan of Marilyn and is very well known for working hard to honor her legacy. The photo was lifted from a Daily Mail article about Susan that appeared last year. 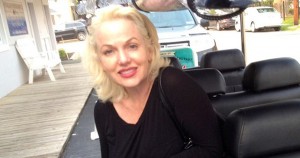 When asked about the article, Ms. Griffiths stated, “Due to the fact that photos are all ever the internet, unscrupulous agencies feel they have the right to print and say whatever they feel, no matter how false or hurtful it may be. I know the lovely Marilyn community knows I would never claim this, and I send much love to all of them for their support.” 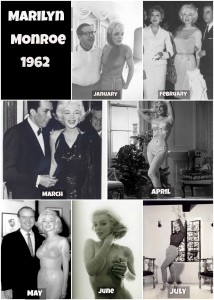 Photos of Marilyn throughout 1962 prove there was no pregnancy.

Other claims in the article are also complete fabrications. The Marilyn/JFK affair rumors have been greatly exaggerated and outright lied about over the years. You can read more about how the lies came about in this Immortal Marilyn article. Photos of Marilyn from each month from January to July 1962 prove conclusively that she could not have been pregnant and given birth at any point during that year.
WorldNewsDailyReport claims that the fictional birth certificate has the name Norma Jeane Mortenson on it….but that was not Marilyn’s in 1962. In 1956, she had her name legally changed to Marilyn Monroe. Post-1956 any official or legal documents would have had the name Marilyn Monroe on them.

The hoax article also states “Some persistent rumors, originating from her gynecologist, Dr. Leon Krohn, have suggested that Marilyn Monroe had become pregnant again in 1961, and given birth to a baby girl in June 1962.” While Marilyn’s gynecologist was indeed named Dr. Leon Krohn, he has never made these ludicrous claims and the rumors definitely did not originate from him.

While some may argue that this is harmless satire, it’s potentially harmful to Susan Griffiths’ reputation and career. As someone who has always tried to portray Marilyn with respect, people being misled into thinking that she is the one making these outrageous claims due to her photo being used can get a false impression of her. It is also incredibly hurtful to Marilyn’s legacy. Marilyn was a woman who badly wanted children. She said in an interview “The thing I want more than anything else? I want to have children. I used to feel for every child I had, I would adopt another.” Unfortunately, motherhood was not destined for Marilyn. She suffered two miscarriages and an ectopic pregnancy, events that were shattering to her. She underwent surgery to correct her chronic endometriosis in an unsuccessful effort to be able to carry a pregnancy to term. To take a woman’s greatest heartache and turn it into click bait under the guise of ‘satire’ is reprehensible.

On behalf of honoring Marilyn and respecting Susan, please do not click or share this incredibly defamatory article from World News Daily Report. Although buried in their site is a disclaimer claiming that they are not responsible for any inaccuracies, and ‘all characters appearing on this website-even those based on real people-are entirely fictional’ Marilyn Monroe was a real person, and Susan Griffiths is a real person. Neither should have their names sullied from a website hiding behind very loosely defined satire.