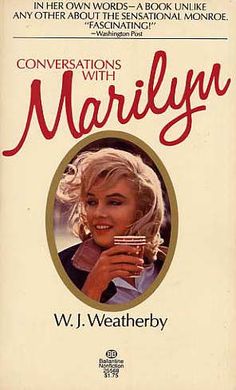 Prior to the filming of The Misfits, journalist W. J. Weatherby met with John Huston and Arthur Miller for background and interviews for a piece he was working on for the Manchester Guardian. Later, in Reno as filming began in 1960, Weatherby met Miller’s wife. Cautiously and gradually, a friendship began to form between Mrs. Miller and the journalist. Long after his piece on Miller had been completed, Weatherby met up with Marilyn again, this time as a single woman living in New York. Over a period of time the two would meet and just talk. That it was just talk and not a story being done on her allowed Marilyn to slowly let down her defenses and regard Weatherby as a friend. True to his word, Weatherby did not write about Marilyn while she was alive. But as a journalist he had, with her knowledge, kept notes from all of their conversations. The only stipulation was that he not “write anything now” (1961).

Weatherby kept his word and in 1976, as the revelations about Marilyn and the Kennedys reached their first crescendo, Weatherby began to gather his notes with the idea of a book to counter the rumors and allow people to hear what Marilyn actually had to say on this and several other topics.

Since its publication, Weatherly’s Conversations with Marilyn has come under some criticism within the Marilyn community, creating a split between those who believe in the conversations he reports and those who are certain Weatherby made them all up, that the author is just another conman squeezing income from a dead moneymaker. The thrust of the argument against Weatherby is that these “conversations” had taken place over fifteen years prior to the book’s publication and that the conversations had been recreated by an author from notes alone as no tape recordings had been used.

Personally, I believe what Weatherby has provided us with is a truthful and insightful work that allows the reader to see and hear Marilyn as she truly was for the last few years of her life, primarily 1960 and 1961. Weatherby is upfront about not recording the conversations or even jotting notes in shorthand as they spoke. But as a journalist, he explains, he was trained to remember conversations and explains that immediately after each of their meetings he would write up the conversations even though it was understood that they were speaking in private and not for publication. If you get the chance, grab a copy of Weatherby’s book and judge for yourself if the words attributed to Marilyn do not ring true.

As a tool to gain insight into Marilyn’s frame of mind during the period following the Miller marriage, the book is indispensable. The woman sitting in a small bar with a friend discussing current events, her past and her future is one of the very few available that allows the reader a connection to a very real person. The Fifties are over, the  Sixties loom ahead and Marilyn is taking stock, making decisions on where she wants her life to lead her, mapping out career paths, trying to come to grips with an often chaotic personal life. By sharing these conversations with the reader, Weatherby has provided those of us who never met her, (but sorely wish that they had), a rare opportunity to simply listen and share the friendship between these two vicariously. Conversations with Marilyn is not at all exploitive; the author is a journalist, he simply reports what he heard. He is also a friend and shares his own thoughts with his readers, his fears for this woman he has grown close to. He is a man who was fortunate enough to have met one of the most famous women in the world, gain her trust and become her friend. And, again in my opinion, he never betrayed that trust as some others would.

Conversations with Marilyn is one of my personal favorites of the many books on Marilyn Monroe. While others may provide more historical data or a wider spectrum by viewing her entire life, Weatherby remains honest in what he accomplishes here: simply sharing his brief friendship with a woman who made an enormous impression on him. If you are new to studying Marilyn’s life, this may be a surprise to hear a woman so far removed from the Hollywood icon of the Fifties. If you have already read a great deal about her, take the time to read just one more small book, one that will leave you feeling as if, finally, you’ve met the woman who has made such an impression on you.