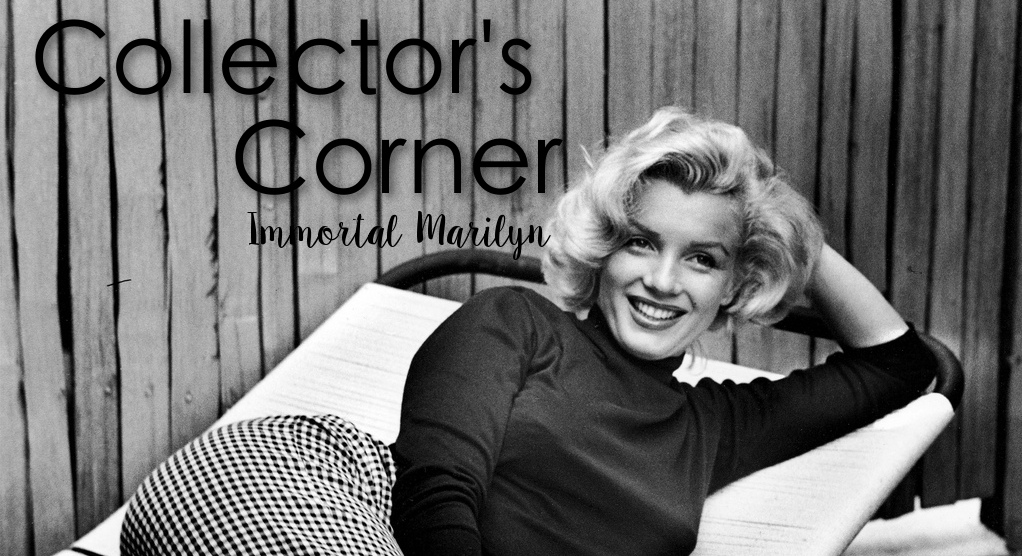 Welcome to Immortal Marilyn’s Collector’s Corner!  This series showcases Marilyn collectors from around the world, taking a look at everything from books to dolls to the rare and unique in the world of Marilyn collectibles and memorabilia.

This week we are proud to introduce IM admin and longtime Marilyn collector, Fraser Penney!

How long have you been collecting?
I started saving stuff from magazines from around the fall of 1976 onwards. It was very slow to start. Clippings mostly. I was 12 and would usually go into town and meet up with friends on a Saturday; we’d go round the records shops and books shops and places like that. I saw her poster and wanted it but I remember having to wait about a year before I was allowed to buy it. There was a book I bought after saving up for what seemed like an eternity. 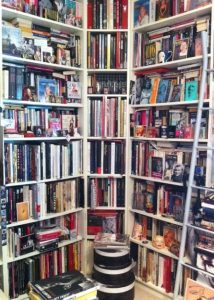 What is in your collection? Do you focus on one particular area or collect all kinds of Marilyn items?
At first, I just collected the books and clippings and it progressed to other things like postcards and posters and photos. I began writing to someone in England and they were a great help at finding things and knowing what had been published beforehand and would send me out-of-print books. This eventually expanded to foreign language books which this friend was able to find for me. Then I started collecting magazines. Once I found a source, I got vintage ones. At the time I wanted to have the Life magazines so just focussed on them and then once they were complete I would move onto Photoplay etc So for the most part it was books and magazines. I tried to collect all I could from when she was alive as it gave you an idea of how she was before the tragedy that befell her. Over the years I went through phases and trends and collected plates and ceramics, film posters and a little bit of everything. When eBay started it also brought opportunities to purchase items like the 1950’s drink trays with and coaster sets and many vintage items which I love.

What is your most prized item?
It’s difficult to pick one thing but it would probably be something my mother bought me; she used to bring things to me she saw without me even having to ask for them and we collected the Franklin Mint porcelain dolls together, so I have great memories of those times when they would arrive. There was a boy at school who brought me a magazine with her on the cover that he had found; it’s creased from where he had folded it but it meant a lot and it’s one of the first things I had. It’s not worth very much but I value it because of the memory attached.

What item would you most like to add to your collection?
If I could add anything it would be her autograph, on a cheque or something, maybe a photo. It’s something that always seemed out of my budget so it would be wonderful to have one some day. 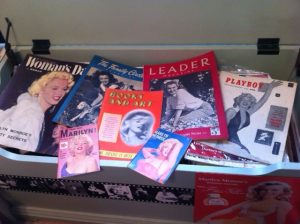 Some of Fraser’s rare magazines.

Is there any advice you’d offer to a new collector?
I would just say collect what you like and what you can afford but be selective. It’s easy to get carried away collecting Marilyn as she is on so many things. It’s always good to get advice about books, as there’s so many now and they’re not always truthful; I collected them all in the past but choose to add only the quality, well researched books now or the picture books, which are always lovely. You don’t have to have everything on her, it doesn’t mean you’re any less a fan. Some of the nicest collections I have seen are not that big. I think a good thing is to find something you like and focus on making that your forte. There’s so many different fields to collecting now. It could be something relating to her films, like the advertising things or vintage stills. Or maybe even her personally owned items if your pocket stretches that far. It really is a personal thing for most and we all have different ideas and aspirations. For me at first it was the books so that’s how I began. I think the thing is to choose quality over quantity but if you like something then have it. 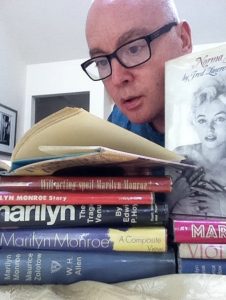 Fraser Penney and his books.

What do your friends and family think of your collection?
They just accept it. I usually get a text or told if something is on TV or they see something somewhere. Even if I am in the town and in a shop the staff will direct me to something if it is related to her, I’m always moved when they think of me along with her as someone I like. I think when they get to know me really well they see I am very passionate about her and some have wondered what makes this so, what is so special about her? And they become aware that there was indeed a person there and not the image everyone is familiar with and try to educate themselves about her. It has on occasion caused problems as sometimes when I have had relationships, for example, it has been brought to my attention that she is in that relationship also because I like to have her pictures up or I am reading something about her or buying something for my collection. It’s usually a sign that the relationship is not going to last as it’s like they’re jealous of an old movie star. I was once forbidden to refer to her, but that’s another story. I try not to let it define me as there’s many things I am interested in and passionate about but Marilyn is very visual which can become a presence. As time moves on I think the old friends I’ve had for years can see for themselves she was something special as she’s never been forgotten and she is picked up by younger generations.