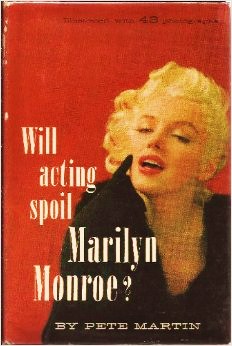 Marilyn’s last words to the press, in the person of LIFE magazine interviewer Richard Meryman, were a plea not to make her a joke. What strikes me is that even then, in what would be her last interview, she had to ask to be taken seriously. Although to those reading this it is nearly impossible to take her any other way, there are still thousands, hundreds of thousands, who continue to blithely write her off as a poster image of another era and certainly no one of true substance. These are the people who have not read anything about her life or character, who don’t realize that she now appears in history books as well as movie star bios, that nearly thirty years ago Gloria Steinem pointed to her as one of the first feminists and others have credited with a pivotal role in both the sexual revolution as well as the Women’s Movement. Over the past forty years Marilyn Monroe has surpassed her icon status; as to her talent, the verdict is now that not only could she act, she was one of the best actresses of her century. The sad part, as that request to Meryman reflects, is that not many realized it at the time.

Pete Martin’s Will Acting Spoil Marilyn Monroe, published in 1956, came on the cusp of the universal critical surprise that there may be more to the “girl” than a wonderful combination of wiggle and giggle. Yet for all the promise of the title, (actually considering the possibility that she can act), the tone of the book is set from the very beginning by reworking the name of the Broadway hit that propelled Jayne Mansfield to household name in a role that capitalized on the very same wiggle and giggle that had become synonymous with Marilyn Monroe.

By the time the book came into being, Monroe had done the diamond thing, done the flying skirt thing, done the elephant and the Joe thing and was just about to travel to England to appear opposite the man whom in many eyes was the epitome of “Serious Acting,” Laurence Olivier himself. The book’s tone however, is one of incredulous disbelief that la Monroe should even attempt to do anything more than what she does best, i.e. keep on wigglin’ and gigglin’. Far from a “serious” look at the very possibility that Marilyn might have some other talents, the book aims instead at the very audience who would shun Shakespeare for a bit more Three Stooges. As the inside dust jacket blurb states: “Reading this book is going to be fun. If you can’t read, there are always the pictures.” Indeed, other than the title, the largest print on the cover is the announcement that inside you will find 43 photographs.

What is surprising is how well Marilyn herself comes off. Although the book is far from a true inside look at “what makes Monroe tick,” Marilyn has the last say in nearly all of its 128 pages. In fact, the entire book is more of an extended interview where Marilyn is allowed to respond to the common questions, right misconceptions and talk at length at what she really wants from life. In my opinion the book is far more insightful than the Ben Hecht penned My Story, allowing Marilyn to speak for herself rather than through a ghost writer. The proof that her words and opinions carried strength comes towards the end of this small book when the writer, (obviously skeptical at the outset that Marilyn Monroe should tackle anything more taxing than continuous revamps of Lorelei Lee), talks about her performance in Bus Stop and refers to her as a “dedicated actress with a capital A.”

Some books gradually become worthy more as objects rather than what words they contain. While the interviews with Marilyn are some of the best, Will Acting Spoil Marilyn Monroe is a good case in point. Sixty years after its publication, the book is now more of a great find, a collector’s piece rather than a great book. Instead, it stands now more along the lines of finding one of those “Golden Dreams” calendars or an authenticated autograph on eBay. But for those who will take the short amount of time it takes to read it rather than just place it as the newest prize in their collection, the book can be, if not an eye-opener, a reinforcement of what we already knew of the world’s perception of her at this point in her life. And, having read it and recognizing its undertone of skepticism prevalent at the time, you will gain an even deeper understanding of what Marilyn was up against. In fact, at least initially, the book and the author’s perspective mirrors the comment made by Olivier when directing The Prince and the Showgirl, that Marilyn should “just be sexy.” Her great payback to Olivier, Martin and all those who thought she should just give up any ideas of being an actress and be satisfied with being the most famous butt of men’s jokes in the world, came with the release of that film: her performance is astounding in its subtlety, sensuality and emotion. Anyone having witnessed her scene where she toasts President Taft walked out of the theater knowing Marilyn could act.

Books, like movies, are a product of their time and sometimes part of the joy is seeing how very much perceptions of a specific time period have changed. Will Acting Spoil Marilyn Monroe is a time capsule of how one woman was perceived during her own lifetime, the title alone reason enough for her to ask her interviewer six years later, “Please don’t make me a joke.”