BOOK REVIEW: MONROE: Her Life In Pictures By James Spada with George Zeno 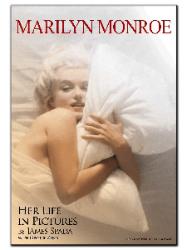 This is the classic photo biography of Marilyn Monroe, first published to commemorate the 20th anniversary of the stars death in 1982. It became a hugely successful, was well publicised and also a book of the month in the mail order bookclubs that were popular at the time.

There’s a colour section with 14 stunning images of some of her most popular pin-ups.While the book itself has been out of print for many years, it can easily be found second hand on the Internet and has recently been made available on kindle.