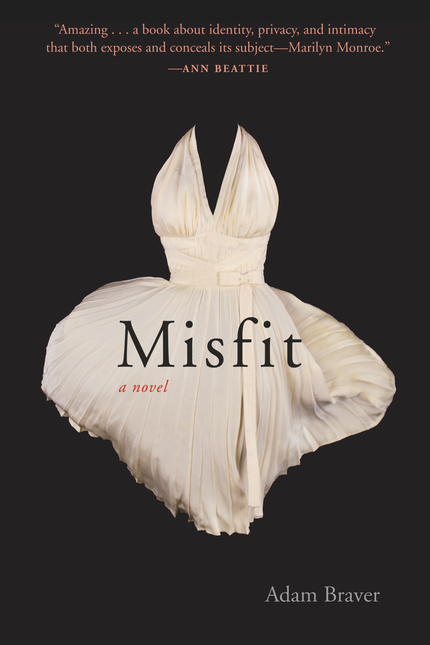 In 1953 with the advent of television threatening the demise of motion pictures as America’s most popular entertainment form, 20th Century Fox studios turned to Marilyn Monroe as their personal savior. Even though her role was arguably smaller than Lauren Bacall’s, it was Marilyn’s name that topped the billing and her legs that stretched across the poster art for their new release, “How to Marry a Millionaire”. It was hoped that the promise of seeing Marilyn Monroe spread out in full Cinemascope would tease the folks in front of those little boxes out of their living rooms and back into the theaters. The studio pinned their hopes on her and they were right—Marilyn Monroe pulled ‘em in and the threat receded.

Four years back a similar threat faced the publishing business. Bookstores were closing, amazon was taking over and sales were dismal. So, thought the publishers, who else could save the printed on paper book if not Marilyn Monroe? Of course, as was the case with Fox’s move, there may have been a slight feel of exploitation with the overabundance of new books suddenly being released but that’s where the handy fiftieth anniversary of her death to came in. As a result, Monroe fans could go into any brick and mortar bookstore and find at least one table devoted to their favorite. New paperback editions of recent favorites stood alongside new biographies; glossy picture books focusing on the star’s lasting impact on fashion, culture and art were displayed beside new novels. One man who photographed her penned a tiny memoir and another who said he spent a week with her years ago was now suddenly enjoying a second printing after the movie tie-in sales began to drop off. It was 2012 and Marilyn was Huge. All over again.

Nearly overlooked among this mini avalanche of new releases was a slim volume titled “Misfit”. Although it might not have made as much money as the glossy coffee table books or as minutely dissected as some of the new biographies, like the film from which its title derives the book went on to be recognized as a classic, a simple tale that revealed layer upon undiscovered layer of its subject.  And, like watching the movie of the same title, the book can be can be returned to over and over, each reading bringing a new discovery, a new subtle surprise and revelation. Of course, also like the movie, the book may not be to everyone’s taste. It’s a bit odd, a bit dark. Quiet, maybe even a bit introspective. Like the movie, and quite possibly, like its central character.

There have been plenty of novels written about Marilyn Monroe, enough so that they have become their own specialized genre. Korda’s “The Immortals”, Stagg’s “MMII”, Toperoff’s “Queen of Desire”, and Bernau’s “Candle in the Wind”, all capitalized on the ready –made character all readers/movie goers loved and thought they knew. Tara Hanks and Norman Mailer wrote first person autobiographical accounts in Marilyn’s voice. Stuart Coates’ even created a sci-fi series focusing on a time-traveling Monroe. As is the case with all Marilyn books, some are terrific and some are, well, not what you’d categorize as “terrific”. But up until now there has only been one book in this subgenre that I would consider literature, Doris Grumbach’s “The Missing Person”. Adam Braver’s “Misfit” brings the count to two.

I know that sounds pretentious but you know what I’m getting at. There are books that are plenty of fun but they’re not going to stick in your mind hours, let alone days and weeks after that last page. You can get a kick out of something like “The Immortals” but you certainly aren’t going to find yourself re-reading a paragraph just to savor the word choice. Max Collins’ “Bye, Bye Baby” or the excellent “The Kennedy Assassination” by J. Arthur Jensen can have you smiling to yourself at the cameo appearance of each well known figure in Marilyn’s final years but they aren’t going to make you think and they certainly don’t add any understanding of the central character’s persona.

So what makes a reader think of one book as a fun way to spend a couple of hours and another as art? That’s a rough question. Picture yourself in a museum contemplating a painting. Now think as you look. What are the emotions that this work conjures up for you? How did the artist feel about his work? What was he trying to make his audience feel? How did he do it? Could be that this same process applies to the written word. You’re reading along and you subtly become aware that the way these words have been strung together have somehow created an emotional response. And like the painting that created a reaction, you find yourself looking closer, studying. How did the author do this? Why does this work? The greatest payoff is when the person looking at the painting, just like the person reading, reaches a point where they don’t care how the artist created the emotion. They just step back and enjoy.

“Misfit” covers the same story as all the hundreds of others that came before but in a way that makes the story fresh and, (even for the fan who has read all those other hundreds and is secretly feeling guilty because they’re afraid they’re getting a bit bored with the story), fascinating. The structure is simple: cover one day, July 27, 1962, with memory flashbacks to all the other days leading up to that weekend at the Cal Neva Lodge. As a result the reader experiences glimpses of Norma Jeane at Radioplane, of Joe and Marilyn at the Villa Nova, of Arthur and Marilyn at the Mapes Hotel – some told from a first person perspective, some from an observer’s. There are also several scenes that have never been explored as they deserve to be – like that last public appearance at Dodger’s stadium, or the lead up to the Wrong Door Raid, like Marilyn and Carl Sandburg dancing at Henry Weinstein’s. The overall tone is quiet, the pace is slow, thoughtful. The result is as powerful as anything I’ve read on the subject, fictional or otherwise.

And this is fiction. It’s one author’s attempt at viewing the familiar with a fresh eye, retelling an oft-repeated tale from various perspectives. There are a few bumps along the way, things that if it were being presented as factual biography I would balk at, demand a source. But this is fiction. If we go back to that thought about the reader being like someone in a museum looking at a painting, think of “Misfit” as something from the Impressionist movement – the images are a little blurred, a little fuzzy when you look up close. But step back and you might think this is the most realistic portrayal yet. Sometimes distance leads to clarity.

Something about this book struck me particularly hard. I don’t want you to get too fired up and, like sometimes happens when someone goes on and on about some movie they loved and when you finally see it your hopes are far too high and you leave the theater disappointed. But look: if the experience hits you like it did me, once you finish you’ll find yourself coming up with all those clichéd one-word blurbs publishers are so fond of putting on the cover of books. Only this time “haunting”, “amazing”, “insightful” and “heartbreaking” really mean something. And like Sammy Davis said after her death, that one about Marilyn hanging in your mind like a bat, the complex muse of Braver’s and so many others will linger on in your subconscious, forever the fascinating enigma. “Misfit” is just that good.