BOOK REVIEW: Marilyn: The Passion and the Paradox by Lois Banner 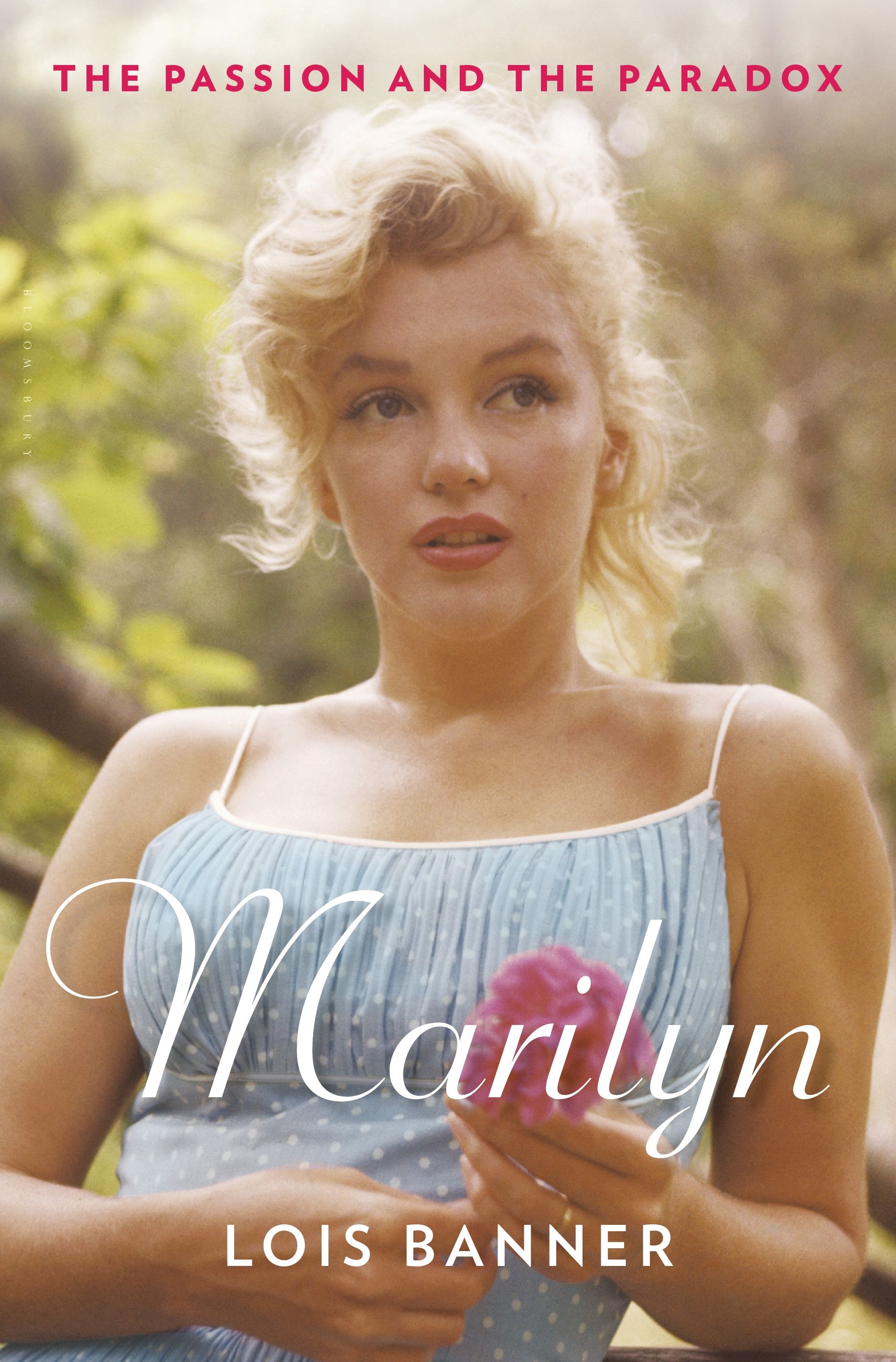 Marilyn Monroe is one of the most chronicled women of the modern age. In the fifty years since her death, she has been a muse to the literary set, and the subject of gossipy exposés. Perhaps what resonates most, though, is her radiant image – captured in a handful of classic movies, and thousands of still photos.

Dr Lois Banner is a professor of History and Gender Studies at the University of Southern California. Her first book on Monroe, MM – Personal, published in 2011, featured the private files of the actress, as photographed by Mark Anderson. Marilyn: The Passion and the Paradox, described as a ‘scholarly biography’, is the outcome of a decade’s research. Banner had access to the source material of a previous biographer, Anthony Summers (whose 1985 book, Goddess: The Secret Lives of Marilyn Monroe, was a bestseller.)

Banner also conducted her own interviews, and consulted the archives of libraries across the US.  As an early pioneer of ‘second wave feminism and the new women’s history,’ she admits, ‘I dismissed Marilyn as a sex object for men. By the 1990s, however, a generation of third wave feminists contended that sexualising women was liberating, not demeaning … Was she a precursor of 1960s feminism? Was there power in her stance as a sex object?’

Monroe’s childhood in Los Angeles was marked by insecurity. In recent years, genealogist Roy Turner and biographer Michelle Morgan (author of Marilyn Monroe: Private and Undisclosed) have reconstructed the places, people and events which shaped the young Norma Jeane. Banner adds her own research and commentary.

Norma Jeane was illegitimate, a social stigma in the 1920s and 30s. She never knew her father, and was probably sexually abused by one of the lodgers who passed through her string of foster homes. After the molestation, Norma Jeane became withdrawn and developed a stutter. She had nightmares, and as an adult suffered from insomnia. Here, Banner follows another feminist writer, Gloria Steinem, who in her 1986 book, Marilyn: Norma Jeane, challenged the opinion of some early biographers that Monroe’s experiences were fabricated. Banner heralds Marilyn’s revelation of abuse as ‘her major feminist act.’

‘In all her early pin-up photos,’ Banner observes, ‘she is a child-woman enjoying her body and seeking attention, sometimes coyly, sometimes boldly, although she never looks vulgar.’ However, Norma Jeane’s metamorphosis into the screen goddess, Marilyn Monroe, was not seamless. As Banner reflects, she had none of the advantages other stars enjoyed: a privileged background, supportive parents, formal training or stage experience.

These factors, Banner contends, made her an ‘easy mark’ for the men who controlled the industry. Marilyn’s self-worth was fragile, and Banner argues that she had a compulsive need to feel desired by men. (Here Banner echoes an earlier biographer, Barbara Leaming, who pointed to Marilyn’s rumoured stint as a ‘party girl’ in her 1998 book, Marilyn Monroe.)

Nonetheless, Marilyn prided herself on not being a ‘kept woman,’ and turned down the crude advances of producers like Harry Cohn. Marilyn’s sexual history is by no means solidly established. What does emerge in these chapters, however, is her complexity. In 1952, she refused to deny or apologise for having posed nude. Studio executives feared a backlash, but fans admired her candour.

Banner writes that Monroe may also have been bisexual. It has long been thought that drama coach Natasha Lytess was infatuated with her, and one of her first biographers, Fred Lawrence Guiles, wrote that actress Joan Crawford had made a pass at her. Dr Ralph Greenson, her last psychiatrist, wrote that Monroe feared being drawn into ‘situations of a homosexual colouring.’ But the evidence points more to sexual curiosity on her part. Several of her friends and colleagues were gay, and she did not appear to feel threatened by them.

Monroe’s lifelong love of learning may have been sparked by her early embrace of Christian Science, which emphasised the careful reading of sacred texts. She enjoyed writers like Thomas Wolfe, whose novels had a broad, romantic sweep. She was inspired by mystics like Kahlil Gibran, and counted Stanislavsky and Freud among her influences. She dreamed of becoming not just a star, but a great actress like Eleanora Duse.

Her marriage to Arthur Miller, then being tried on charges of communist affiliations, strengthened her belief in political freedom.  She also supported Civil Rights. In 1955, she temporarily abandoned her movie career to form an independent production company. Only one other actress, Olivia de Havilland, had so openly challenged the Hollywood establishment. Monroe’s success was hailed by Look magazine as a triumph of the individual over corporate greed.

After studying with Lee Strasberg at the Actors’ Studio, she decided to undergo psychoanalysis. Banner comments that it may not have been the right choice, as traditional Freudian theory tended to underestimate the lasting damage caused by molestation.

Banner notes how unsympathetic some of Marilyn’s directors were. Billy Wilder, the film-maker behind The Seven Year Itch and Some Like it Hot, berated her in public. Sir Laurence Olivier and George had little respect for Method acting. Among the directors who bonded with Monroe were Henry Hathaway and Jean Negulesco, and both were impressed by her intelligence and sensitivity. Joshua Logan, who directed her in Bus Stop, considered her one of the greatest screen actors, on a par with Chaplin and Garbo.

In her last completed film, The Misfits, Marilyn fulfilled her promise as a serious actress. But it is her comic creations that are most fondly remembered. Banner praises the subtlety and depth Monroe brought to often stereotyped roles.

Banner argues that Monroe’s return to Los Angeles in 1961, and her alleged involvements with Frank Sinatra’s ‘Rat Pack’ and the Kennedys may have been her undoing. Anthony Summers investigated these rumours during the 1980s, so it’s not surprising that Banner follows this line of enquiry. In his 1992 book, Marilyn Monroe: The Biography, Donald Spoto convincingly discredited two of Summers’ major sources: Robert Slatzer and Jeanne Carmen.

Spoto was also the first biographer to implicate Dr Ralph Greenson in Marilyn’s death, but Banner contends that Greenson had ‘no motive.’ Nonetheless, his unusual treatment of Monroe has been widely criticised. Greenson took Marilyn into his home, leading her to repeat the pattern of trying to create a substitute family. Their psychoanalytic sessions were held daily, causing Marilyn to become overly dependent on him. Significantly, Greenson never conclusively diagnosed her condition. Banner suggests that she may have suffered from Bipolar Disorder, though this is by no means certain.

Marilyn’s friend, the poet Norman Rosten, suspected that she would have been ambivalent towards feminism. ‘She had achieved the financial and legal gains (feminists) sought,’ Banner reflects. ‘And she enjoyed her femininity, recognising its power over men.’ Banner identifies this stance as post-feminist. ‘On the other hand,’ she counters, ‘one could argue that it was her fixation with femininity … that caused her victimisation.’

Arthur Miller’s 1964 play, After the Fall, featured Maggie, a self-destructive character based on Monroe. Banner argues that Miller’s portrayal of his former wife was ‘misogynist.’ However, in considering what future paths Marilyn might have taken, Banner looks to Barbara Loden, the actress who played Maggie in the original stage production. (Disillusioned with the star system, Loden later became an independent film-maker.)

‘In the case of Marilyn,’ Banner admits, ‘people believe what they want to believe.’ At times her approach seems unavoidably intrusive. Her depiction of Marilyn’s conflicted sexuality is intriguing, but not wholly persuasive. Marilyn: The Passion and the Paradox is a fine biography, but as with all studies of Monroe, it should be read with a critical eye.