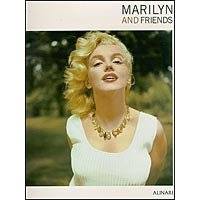 The photographs that illustrate this book are by father and son, Sam Shaw and Larry Shaw and although the Marilyn pictures here have been published in various volumes over the years, the other photos in this book are well worth seeking out… Most of them are actors at work with some of the greats from Marilyn’s era: Marlon Brando, Sophia Loren, Cary Grant, Gina Lollobrigida, Gregory Peck, Clark Gable, Sean Connery among them… the list is endless & then you have many European stars like Romy Schneider, Anna Magnani etc and we’re taken onto the sets of I, Confess, The Longest Day and Woman Under the Influence and see the great directors like Hitchcock & Cassavetes at work too!

There’s even a photo of Mr Joe DiMaggio in Sicily, so there’s really alot packed into this book.It’s a lovely book and I personally love the photos that Sam took of Marilyn, she’s so naturally beautiful in them and I think some of them really capture the sensitive side of her, she’s so pretty with the summer breeze in her hair, very childlike and dreamy. It’s quite pricey for a softcover, but if you’re a film buff, you’ll like it as the pictures here you don’t often see published together like this, I believe they form an exhibition, hence the reason for this book. So go on, indulge yourself.It’s not a book that’s easy to find but you can source it on Amazon.