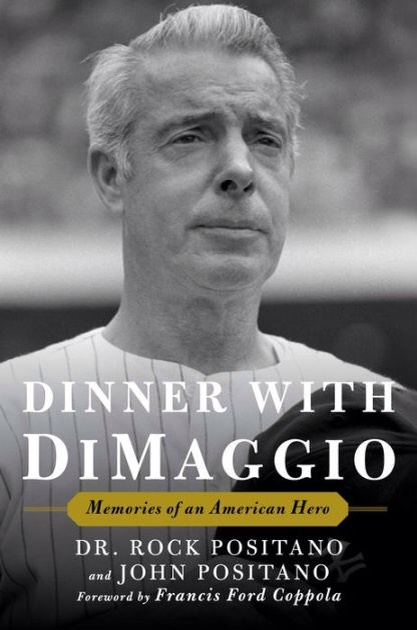 Dr Rock Positano was thirty-two, with his own practice in Manhattan specialising in non-surgical treatments for foot and ankle problems, when he met Joe DiMaggio in 1990. At seventy-six, DiMaggio still suffered from the effects of a botched foot operation which had brought his baseball career to an abrupt end in 1951. Over the next decade, until Joe’s death in 1999, Positano became his New York  companion and confidant. A notoriously difficult man to know, DiMaggio was both deeply private and intensely concerned with his reputation. First announced back in 2015, Dinner With DiMaggio: Memories of an American Hero promises a rare glimpse into the private life of a frequently misunderstood man, and although occasionally prone to sensationalism, for the most part it delivers.

Joe was a fisherman’s son, and his father – a Sicilian immigrant to San Francisco – had wanted him to follow the family trade. Having disappointed him at an early age, Joe grew closer to his mother. Throughout his life, he strove to avoid any hint of scandal. This perfectionism made him fiercely self-critical, and equally intolerant of others who failed to meet his high standard. He came face to face with one of his own idols when President Franklin D. Roosevelt, who guided America through the Great Depression, saw him play in the 1936 World Series. After the game, the president got into a big limousine parked on the infield. “Joe, great catch!” he said, his hands cupped. “FDR was my hero,” Joe marvelled, “and he was admiring me!”

During World War II, his parents (like many other Italian Americans) were declared ‘enemy aliens’. It’s no surprise that Joe resented his military service. President Roosevelt barred him from overseas combat, and he was assigned to the USO entertainment division. But his patriotism was proved beyond doubt when he helped the FBI to track down a suspect in a 1959 narcotics case.

Joe met his first wife, showgirl Dorothy Arnold, on a film set. Their son, Joe DiMaggio Jr., was born in 1941, but the couple were soon embroiled in a bitter divorce. “Dorothy was always trying to get between my little guy and me,” Joe told Positano; nonetheless, even when she sued him for more money, Joe refused to disclose her infidelities (not to mention his own.)

Although he was a lifelong movie fan, Joe’s brushes with Hollywood left him unimpressed. In the late 1940s, he was dining at the Stork Club with some of the biggest names in the movie industry, including Marlene Dietrich and the Bogarts. “Those Hollywood big-shots were all baseball fans,” he recalled, “but they liked to talk about themselves more.” Charlie Chaplin came to the table and introduced himself to Joe, while pointedly ignoring the others. “I didn’t know that he was being blackballed by the entertainment industry and not welcome in Tinseltown,” Joe explained. “My companions and their huge egos were flabbergasted.”

From the New York Post to The Times, media coverage of Dinner With DiMaggio has mainly focused on his ill-fated second marriage to Marilyn Monroe, although it comprises only a small part of the book. “I knew better than to pry,” Positano says, claiming that Joe gradually opened up. “He also spoke with [lawyer] Morris Engelberg about Marilyn,” he adds, “but I never knew what he told each of us, and Morris and I never compared notes.” 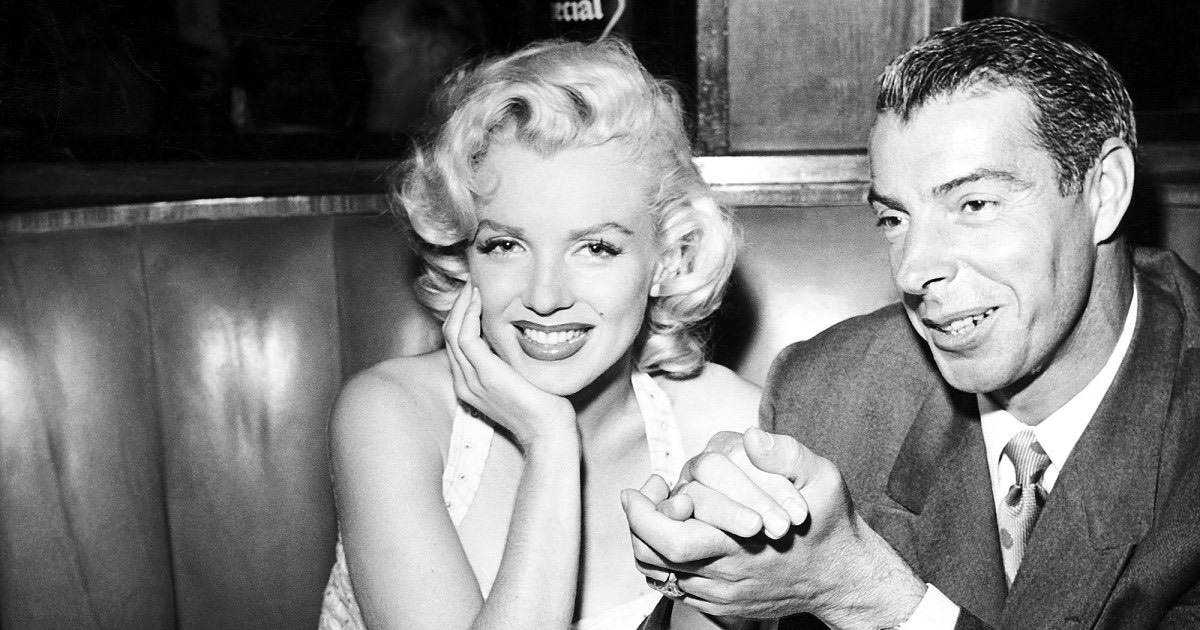 Joe thought Marilyn was both beautiful and “highly intelligent,” as Positano revealed in a recent interview for People magazine. “He had a tremendous amount of respect for Marilyn because she was a really great actress.” Their marriage ended, Joe said, because “Marilyn was hurt by the woman thing – her inability to have children.” On their wedding day, Marilyn told reporters she hoped for six children; Joe wanted just one. She suffered from endometriosis, which made it extremely difficult for her to carry a pregnancy to term. Nonetheless, her star was rising when she married Joe, and babies seem not to have been an immediate priority. His jealousy, and her ambition, were more likely causes of the split. When crowds gathered to watch her standing over a subway grate during filming of The Seven Year Itch, columnist Walter Winchell dragged a reluctant Joe along. The couple separated shortly afterward. A few weeks later, Joe and Frank Sinatra tailed Marilyn as she drove to a dinner date, and broke into a neighbouring apartment. The resident sued, and the so-called ‘Wrong Door Raid’ was a rare public disgrace for Joe.

“Doc, Marilyn told me that no man ever satisfied her like I did,” Joe said. Although respectful in public, Joe apparently took a dim view of her third husband, Arthur Miller. Sinatra told Joe that Marilyn kept a photo of him hidden in a closet, which “drove Miller crazy and right to the divorce court.” This story was first published in Marilyn Monroe Confidential (1980), the ghost-written memoir of Lena Pepitone, her New York maid. Others, like Marilyn’s friend Amy Greene, have spoken of her sexual chemistry with Joe, although she would later write of being “attracted beyond my senses” to Arthur. Joe’s name was not cited in the Millers’ 1961 divorce, which was granted on grounds of mutual incompatibility.

In the final years of her life, Marilyn grew close to Joe again. Talk of reconciliation was rife, but she insisted they were just good friends. He allegedly blamed the Kennedys for her death. “They did in my poor Marilyn,” he lamented. “She didn’t know what hit her … my good friend, Frank Sinatra, was their pimp.” Joe had probably been hurt by Marilyn’s relationship with Frank, but by 1962, when her alleged involvement with John F. Kennedy occurred, the president had distanced himself from Sinatra. Positano repeats the tale of Joe snubbing Bobby Kennedy at Yankee Stadium in 1965.

But Marilyn had a long history of depression, and was addicted to sleeping pills. Joe told Positano that she would sometimes neglect her appearance. “Though Joe saw Marilyn’s behaviour become erratic, he was unsophisticated about mental illness,” Positano reflects. “I had the impression that Joe did not understand what happened. He was to regret it for the rest of his life.” He may have experienced a form of survivors’ guilt, which left him susceptible to the rampant gossip and conspiracy theories that have circulated ever since Marilyn’s death.

Marilyn was fond of Joe’s son, who was twenty-one when she died. Their frequent telephone conversations were apparently a cause of concern to Joe. It’s possible that the younger man could have developed a crush on Marilyn, but there is no indication that her own feelings were anything but maternal. These pitiful confessions expose Joe’s hidden insecurity, and at times feel uncomfortably intrusive. In later life Joe Jr battled alcoholism and died penniless, survivIng his father by only a few months. Although their relationship was further strained by “lies and exaggerations” in the press, Joe was devoted to his granddaughters and great-grandchildren. One of his proudest achievements was the opening of the Joe DiMaggio Children’s Hospital in Florida. “Joe’s fatherly skills must have skipped a generation,” Positano concludes.

With well-chosen investments, lucrative advertising endorsements and an active role in the growing trade for sports memorabilia, Joe was a wealthy man. “All of us ballplayers have Joe to thank for a life after baseball,” said fellow legend Sandy Koufax, while Positano admitted, “I was impressed by his business savvy … Not bad for a high school dropout.” But Joe refused to consort with anyone he didn’t respect, regardless of their credentials. At the 75th anniversary gala for Time magazine, he turned down an invitation to meet the Clintons. On the other hand, he was friendly with former US diplomat Henry Kissinger, and the unlikely pair attended the 1997 World Series.

Although he never remarried Joe was still attracted to women, nursing a secret crush on supermodel Elle McPherson. Pop star Madonna would mention both Joe and Marilyn in her hit song ‘Vogue’, appearing as a Monroe clone in the video. During his final trip to New York in 1999, a frail Joe was in a nostalgic mood. “I miss Marilyn more than ever,” he confided. “Marilyn, Frank and me were all working-class kids. No one taught us this fame-and-fortune racket. In our own way, it wounded us all. But I can say I regret nothing. Well, almost nothing … Doc, we should have reached out to help each other. Marilyn, Frank and I tried to stand on our own. We didn’t do too well …”