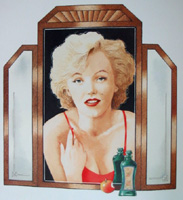 As a Marilyn fan you already know that no matter how many new books come out with your favorite as the subject, you’ll never tire of buying them as each has its own individual bent, its own individual worth. And, as these books have been coming out on a regular basis for well over fifty years, there’s hundreds of older or possibly out of print treasures that you might have missed. That’s where you’ve got to love the internet and the ease with which you can now track down obscure gems without hitting every used bookstore you come across—and besides, those wonderful out of the way obscure little stores are becoming more and more rare, harder and harder to find.

So here’s an obscure little treasure you might not have heard of, a little something you can search for online and hopefully find as delightful as I did.

Say that you wanted to remake your all-time favorite movie but you don’t have a couple of hundred million. Say that although you enjoyed it, Peter Jackson and Naomi Watts just didn’t quite match up with your idea of that remake should be. Say, as much as you might like Jessica Lange, you thought the 1976 attempt at updating the original King Kong was just this side of blasphemy. But say you had the opportunity to recast Fay Wray with any actress, living or dead. What would you do?

The solution Anthony Browne came up with was to do what comes naturally. As an award-winning writer and illustrator of several children’s books, the answer was to create a lushly illustrated children’s book to retell the story of the giant ape who fell for the shapely blonde. And who better to play the shapely blonde than Marilyn Monroe? And bias that I may be, even as an illustration, Marilyn beats out both Naomi and Jessica in revamping Fay Wray’s performance as the Beauty that felled the Beast.

Excellent idea, eh? In this age where thanks to computer wizardry Willem Defoe can be transformed into MM just by eating a Snickers bar, Browne has gone back to basics by simply drawing Marilyn into his retelling of the 1933 film classic. An added treat is that avid fans will be able to spot the origin of each illustration: Marilyn in a still from Niagara, sitting at the microphone at a table following the Rose Tattoo premiere, Milton Greene’s classic chiffon/ballerina series- these and many more have been studied by Browne and recreated so that Marilyn now appears naturally inside the story of the mighty Kong. 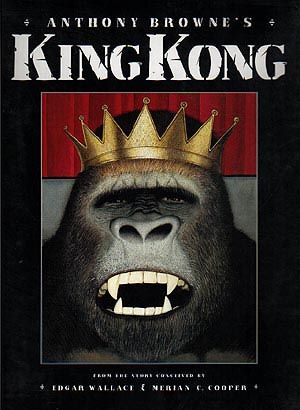 So how does Marilyn hold up against the original scream queen Wray? So good in fact, that you’ve got to wonder why Mr. Zanuck didn’t come up with the idea way back when—this certainly would have saved the studio from Cleopatra. My only disappointment in this little bit of delightful is that she doesn’t have half the “screen” time as Kong. But that’s coming from a longtime Monroe fan and not from the audience the book is aimed for — children. And, given the title, it makes sense that Kong would be the center of attention. Still, like any Marilyn movie, even when she’s not on the screen you can’t help but think of her and wish she’d come back.

All in all, the book and the concept is an absolute hoot. I’d heard of the book a few years ago and had it in the back of my mind as part of an ever-growing wish list. But as the book was fairly rare, I just assumed that it was likely out of reach of my budget. Wrong. I was able to find the book immediately through an online book search- and now have it in my hands for $5.99 plus shipping. Not bad at all.

So how can you reconcile being an adult and buying a book with Large print and aimed for someone considerably younger? I think the response would be along the lines of “Duh.” Just seeing Marilyn appearing in a new role is worth far more than $5.99. Add in the fact that the concept is brilliant and the illustrations are fantastic, do yourself a favor and indulge in a guilty pleasure—yet another Marilyn Monroe book. You’re worth it, right?