The Truth About Marilyn’s Alleged Affairs With Women

There may be no star in history who has had her sex life dissected as much as Marilyn Monroe.  From claims she had affairs with powerful men to claims that she worked as a call girl, Marilyn’s name has been dragged through every possible sexual situation.

Tales about Marilyn’s sex life are tales you can take straight to the bank, and so it’s no surprise that dozens upon dozens of people have popped up out of the woodwork claiming to have been her lovers.  With all the people she’s supposed to have slept with, it’s a wonder she had any time to make movies.

Recently, yet another article has popped up claiming to expose Marilyn’s big sexual secret: that she was a lesbian.

This isn’t a new story; it’s been making the rounds for years.  It’s been alleged that Marilyn had a sexual affair with her acting coach, Natasha Lytess.  She’s been linked with other famous women in Hollywood, such as Joan Crawford and Marlene Dietrich.

But the publication of the book “My Little Secret” by Tony Jerris, based on the story of Jane Lawrence, a few years back crossed a whole new line – claiming Marilyn had a sexual relationship with her underage fan club leader, and describing it in detail.  The book is full of other lies and nonsense as well, but unfortunately, as with most things Marilyn, once it’s in print people believe it.

So Was Marilyn Sexually Involved With Women?

There is zero evidence to support Marilyn having sexual relationships with women.  Marilyn herself stated clearly that she was not a lesbian:

“A man who had kissed me once had said it was very possible that I was a lesbian because apparently I had no response to males-meaning him. I didn’t contradict him because I didn’t know what I was……Now, having fallen in love, I knew what I was. It wasn’t a lesbian.”  – Marilyn Monroe, My Story, 1954.

None of the other stories have ever been supported.  The gossip-filled article going around right now (no, we won’t link to it) offers several unsupported claims as truth, including that Marilyn propositioned both Betty Grable and Judy Garland.  The sources of these claims are unreliable, and that’s putting it mildly.  These two women were friends of Marilyn’s.  Even if something like that had happened, both were far too classy to ever tell the tale.  And there’s not only no evidence, but the behavior doesn’t fit Marilyn’s personality at all.

The article admits that the Jane Lawrence book may have some lies, but then goes on to quote it anyway.  This is how these stories continue to be spread in spite of having no basis in truth.

Is it possible Marilyn at some point had a sexual encounter with a woman?  Sure.  Is there any real evidence of it?  No.

Does it Matter if She Liked Women?

No, it doesn’t matter.  We aren’t refuting these tales because we care whether or not Marilyn had sexual relationships with women.  Marilyn herself was known to be open-minded about sexual orientation. 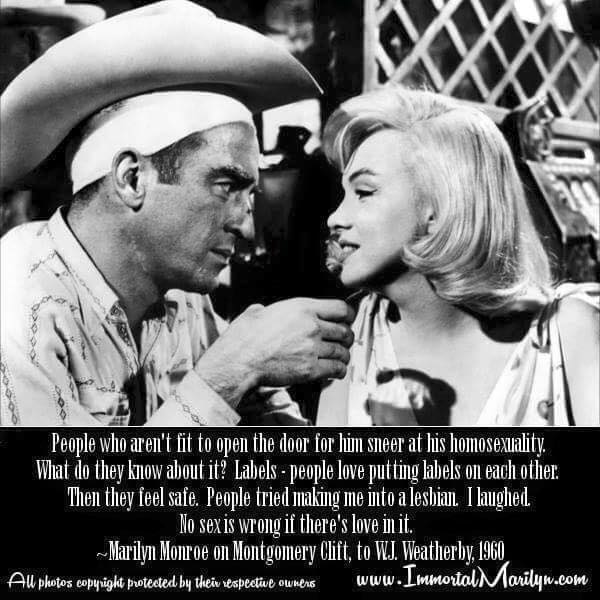 She was supportive of her gay male friends forced to hide who they really were in a restrictive era, and we at IM like to think she would have been front and center in the fight for marriage equality had she lived long enough to see it.

It’s not a question of whether or not Marilyn’s fans care who she slept with.  It’s a question of the truth, and of debunking the lies and rumors that surround Marilyn.

And the truth is that there is no evidence to show that any of the claims of affairs with women are true.