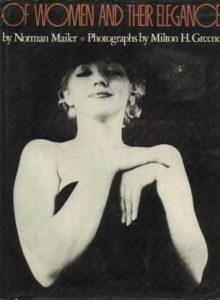 Of Women and Their Elegance

With photographs by Milton H. Greene

The thing with Mailer is like the thing with Hemingway—you either love him or you can’t stand him. It’s hard to be ambivalent about a larger than life figure, be it Mailer, Hemingway or, yes, Marilyn Monroe. Mailer is full of himself, pretentious at times, an icon and touchstone of his times, one of those guys who try so hard at being the ultimate macho man that you can’t help but be put off while wondering at the same time why he is so preoccupied with making sure his image is one of Primal Man. And he was talented. Very.

Marilyn was one of the ones who couldn’t stand him, primarily due to his forever heavy handed attempts to meet and be a part of her life. What comes through in the accounts of her response to Mailer is the idea that she thought him a macho ass who was far too full of himself. Personally I get a kick out of him and think some of his work brilliant, (The Naked and the Dead, The Executioners Song, The Idol and the Octopus), while some of it is incomprehensible, (Harlot’s Ghost), or just flat out bad, (The Deer Park). And, as most of you know, Mailer was somewhat obsessed with Marilyn Monroe. The only difference between him and any man of his generation was that he published two books about the object of his obsession while all the others merely dreamed. Let me make on more point about Mailer: He was obsessed with Marilyn Monroe, the movie star, the sexual fantasy. He never met, let alone knew or had any insight into the actual woman behind the Hollywood veneer.

The best known of Mailer’s attempts to get Marilyn down on paper was his first, Marilyn, and to be honest, it is primarily remembered due to its lush illustrations capturing Monroe the still photograph model non-parallel. Seven years later, feeling he hadn’t quite captured her, Mailer brought out Of Women and Their Elegance. And, like everything else he ever produced, it is a work that you either love or really pisses you off. The later opinion is the result of the unique angle Mailer attempted—the text is written as if it were Marilyn’s actual thoughts and for most fans, knowing how little she actually thought of him, the idea of his penning her inner most thoughts is slightly galling.

Does he carry it off? I don’t think so but then maybe you will. Should you try and find a copy or leave this one out of your collection? I say find it and treasure it—not so much for the oddity of a man who styled himself as one of his generation’s macho icons but as the attempts of a lovelorn fan trying hard to understand the woman he never met. And the photographs. Ah yes, the photos. The book is chock full of Milton Greene’s work, THE Monroe photographer in my opinion and that of many MM fans. What may sound strange coming from me is that what is truly wonderful here is that not all of the photos are of Marilyn but a good sample of Greene’s non-MM work. By including his work with such luminaries as Marlene Dietrich, Anna Magnani, Judy Garland, Sophia Loren, and Jane Fonda, you can see that Milton’s genius could and did expand from his legendary work with Marilyn.

The text, the reader is told, “while based on episodes in Marilyn Monroe’s life, and on the reminiscences of Amy and Milton Greene, does not pretend that these are the actual thoughts of Miss Monroe…” And while the Marilyn depicted here is the Marilyn of Norman Mailer’s imagination and likely a far cry from the actual human who was Marilyn Monroe, it is an interesting concept especially when you keep reminding yourself that this is work of a man infatuated with an image, who longed to meet and possibly know the real woman yet never had the opportunity. That is the true reason for my own fascination with this book, knowing how much he wanted to meet her and couldn’t help but realize that she in no way felt the same. It is the work of a man saddled with an unrequited love/lust infatuation trying to understand the woman who held herself forever out of his reach or understanding.