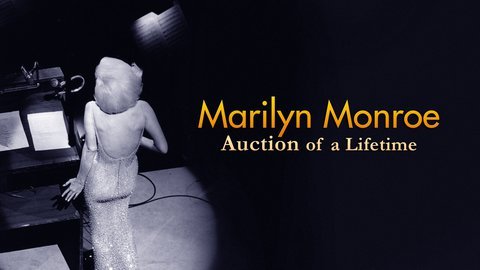 A new Channel 4 documentary, Marilyn Monroe: Auction of a Lifetime, begins with some footage of the star in 1960, arriving in New York for test shots on what would be her last completed movie, The Misfits. The grainy clip was filmed by Frieda Hull of the Monroe Six, a gang of teenage fans based in Marilyn’s adopted city. One of the perks of Frieda’s job – airline stewardess – was a proximity to her idol on both coasts, and with Monroe’s goodwill, she amassed a large archive of candid photos which remained unseen until her death in 2014. A batch of colour snapshots taken the same day, was purchased recently by a former acquaintance of Hull, who claimed she told him Marilyn was secretly pregnant at the time by her Let’s Make Love co-star, Yves Montand. This random piece of hearsay was reported in the Daily Mail, and the National Enquirer who upped the ante by stating the father of this phantom baby was future president John F. Kennedy. 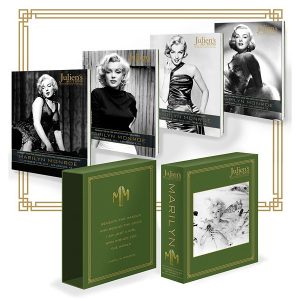 “She was an object of desire for men and an inspiration to women,” says narrator Tracy Ann Oberman, as familiar images of Marilyn cut to a still of Madonna in her Blond Ambition days. Ever since the first dedicated auction at Christie’s in 1999, her possessions have become the most covetable of any modern celebrity. After a touring exhibit stopping off in London, Ireland, the USA (via a transatlantic cruise) and China, Julien’s Auctions held the largest sale to date in November 2016, drawn mostly from the estate of Lee Strasberg, and ranging from household goods and cosmetics to sketches and poems; the British collector David Gainsborough Roberts, who has amassed a number of her most famous movie costumes; plus smaller archives like Frieda Hull’s, and mementoes from the estate of Lois Weber, Marilyn’s former publicist. Even the four-volume catalogue, spread over 1,000 pages, is a collectors’ item priced at $400.

“This is the last chance to see her through the things she loved,” Oberman says, although several lots (especially photographed) have reappeared on EBay. Even the auction’s centrepiece, the beaded ‘nude’ dress worn by Marilyn on John F. Kennedy’s birthday, first went on the block in 1999. It was sold again last November for $4.8 million – the most ever paid for a dress. The buyer, Ripley’s Believe It Or Not, will present it in future exhibitions. Some of Marilyn’s cash-strapped fans wish her property had been kept together, perhaps in a museum, but not even the Smithsonian can afford to invest now. Nonetheless, the diehard fans are a fairly close group, and I recognised several familiar faces among the bidders – including lookalike Suzie Kennedy, who also voiced some of Marilyn’s private notes for the documentary. Decorated for the occasion with giant, wall-to-wall photographs, the Beverly Hills auction house resembled the ‘Church of Marilyn’ in Ken Russell’s rock opera, Tommy.

Although there are some tantalising remnants from Norma Jeane’s early days, the narrative quickly skips ahead to the ‘red velvet’ calendar shots taken by Tom Kelley in 1949, when Marilyn was still relatively unknown. By 1952 she was on the cusp of fame, and as Sarah Churchwell observes, she would be the first major star to survive a nude photo scandal. “You don’t become the biggest movie star in the world by accident,” Churchwell concludes. At dinner with her agents, Marilyn jotted down notes on the menu, spelling out her vaulting ambition (“I can be one of your greatest stars”) and dramatic technique (“Think with your body – let go physically to pick up emotionally…”)

As actress Ellen Burstyn points out, this holistic approach was inspired by one of Marilyn’s favourite books, The Thinking Body by Mabel Elsworth Todd. Winning the role of Lorelei Lee in the glitzy musical, Gentlemen Prefer Blondes (1953), would be her reward. The dress worn by Marilyn in the opening number, says fashion historian Amber Butchart, made her “the quintessential showgirl – blood red, sequins everywhere, and form-fitting with that incredible plunging neckline.” (However, some experts believe the costume sold at auction may actually have been Jane Russell’s identical number.) 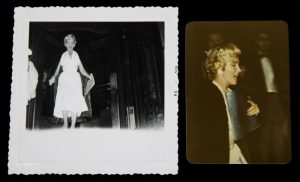 “I was astonished that a girl could be that sexy on purpose,” Ellen Burstyn recalls of Marilyn’s screen persona. “She revolutionised the female image.” Her explosive sexuality would also wreck her marriage to Joe DiMaggio. Candid photos by Frieda Hull show Marilyn on a New York street one September evening in 1954, preparing to film an outdoor scene for The Seven Year Itch. Arriving on Lexington Avenue, she wore her mink coat – a gift from Joe – over a cream, silky halter dress designed by Travilla for the movie. Her hair was still pinned, and she clutched a script. A raucous crowd gawped as she stood over a subway grate, her skirt blowing in the cool night air.

The city became her sanctuary, as she left marriage and Hollywood behind. Sarah Churchwell – author of a ‘meta-biography’, The Many Lives of Marilyn Monroe – describes the move as “a laudable attempt to create professional control … a new side of Marilyn was emerging.” She also came under the influence of Lee Strasberg, head of the Actors Studio. Marilyn in Manhattan author Elizabeth Winder says he taught Marilyn to “lean into her sensitivity.”

When Marilyn renegotiated her contract with Twentieth Century Fox, Time magazine praised her as a “shrewd businesswoman.” Her ‘comeback’ movie, Bus Stop, established her as not only a sex symbol, but also a formidable actress. Co-star Don Murray recalls that she dubbed her skimpy costume as weary nightclub singer Cherie a “snake outfit,” making serpentine gestures while singing ‘That Old Black Magic’ to a room of drunken cowboys. Amber Butchart notes that Marilyn chose authenticity over glamour, ripping up her fishnet stockings and clumsily darning them.

This UK-made documentary, helmed by Rosie Schellenberg, places a special focus on The Prince and the Showgirl, the film Marilyn made (and produced) in England. Agent Jay Kanter remembers her hiding in the bedroom “like a frightened deer” when she first met her co-star and director, Sir Laurence Olivier, but the venerable actor believed she could revitalise his career. Torn between Olivier’s disdain for method acting, and criticisms of the script from her new husband, playwright Arthur Miller, Marilyn’s confidence was shaken.

Biographer Lois Banner cites the alleged incident when Marilyn found Miller’s diary, claiming that he had written “words to the effect of ‘I married a whore.’” However, Miller’s diary has never been made public, and Elizabeth Winder may be nearer the mark when she suggests that Arthur simply felt that living with Marilyn was not what he expected. Banner also claims that Arthur “never had good sex before Marilyn,” whom she describes as “very practiced and experienced,” adding, “she blew his mind.” How Banner could know such intimate details is unexplained, and while Miller may have admired his wife’s sensuous nature, theirs was a traditional marriage, and Marilyn’s longest relationship.

After a brief sabbatical – rather melodramatically characterised as “a desperate attempt to save her marriage” – she returned to Hollywood for Some Like It Hot, her greatest success. She was also pregnant, but would later suffer a miscarriage. “She sometimes didn’t show until noon,” recalls Marian Collier, one of the last surviving members of Sweet Sue’s band. Director Billy Wilder was “calm and patient,” but leading man Tony Curtis “got a little upset.” The seamy black dress Marilyn wore to sing ‘I’m Through With Love’ was so tight that she had to be lifted onto the piano. “That was her voice, you know,” Collier says – many other stars of that era were dubbed. “Marilyn Monroe gives the film a heart,” Sarah Churchwell remarks. “She makes it touching and poignant.” 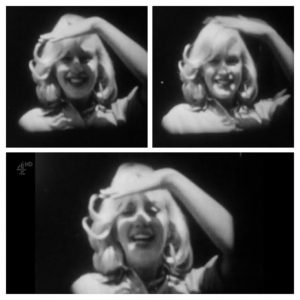 Marilyn’s brilliant performance in The Misfits is overlooked, as the narrative skips to her 1961 photo shoot with Douglas Kirkland, in which she lay nude under silk sheets. “She found the images that portrayed the Marilyn she felt she wanted to see portrayed,” Kirkland comments, remembering how she expertly manoeuvred the project from beginning to end.

“Six months later she was sleeping with JFK,” the narrator continues, although no conclusive evidence of an affair can be found among the thousand lots at Julien’s. As so often happens in Monroe lore, the legend has surpassed reality. As the camera pans over the prescriptions and pillboxes she left behind, Sarah Churchwell offers a sobering analysis of Marilyn’s final decline: “There was no stability in her childhood. The Hollywood environment exacerbated those anxieties … She was often isolated, lonely …”

Last year’s auction at Julien’s raised $11,000,000 – Marilyn died with only a few hundred dollars in her checking account. She had been fired from her last movie, and although the narrator adds that a lucrative new deal was in place, this had not been finalised. The modesty of her estate stands in stark contrast to the vast profits still being made from her name. The woman who wanted her possessions to be divided among her friends would probably be bewildered by events like this, but it is perhaps an inevitable consequence of her enduring fame. “There was a sweetness about her,” says Ellen Burstyn, who knew Marilyn during her Actors Studio days. “She never played dark characters – always played characters filled with light, like a sexy angel. There has never been anyone like her.” 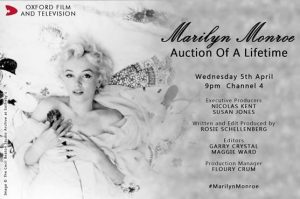