Marilyn Monroe and Bobby Kennedy: “Convincing” Evidence Not So Convincing

On September 27, 2016, The Telegraph ran a story about an interesting item consigned to the upcoming sale of Marilyn Monroe items at Julien’s Auctions in November. The item is a letter from Jean Kennedy Smith, younger sister of John and Bobby Kennedy written to Marilyn sometime in 1962. It first surfaced at an auction at the Odyssey Gallery in Hollywood back in 1994. The Telegraph quotes part of the letter as such:

“Understand that you and Bobby are the new item! We all think you should come with him when he comes back East!”

It’s an interesting piece of Monroe ephemera, but naturally The Telegraph uses insinuations and speculation to imply that those two lines infer far more than they actually do. Martin Nolan, executive director of Julien’s Auctions, goes a step further and turns rumor into a declarative statement by saying

“There’s always speculation about her relationship with the Kennedys. This speaks to the fact that there was in fact a relationship between Bobby Kennedy and Marilyn Monroe.”

Other sources that have picked up the story have called it ‘definitive proof’ and ‘convincing evidence’ of an affair between the actress and the attorney general.

So is this true? Is the letter from Jean Kennedy Smith ”proof” of something intimate going on between Marilyn and Bobby? Or is it just more tabloid fodder being repeated in the hopes of drumming up more publicity and interest in the sale?

Before getting into the letter and the context it was written, first we must look at the facts of the relationship of Marilyn Monroe and Robert Kennedy.

Marilyn met Bobby Kennedy for the first time on February 1, 1962 at a dinner party at the home of Pat and Peter Lawford.  The next day,February 2, she wrote letter to her former father in law Isadore Miller and her stepson Bobby Miller about the evening: 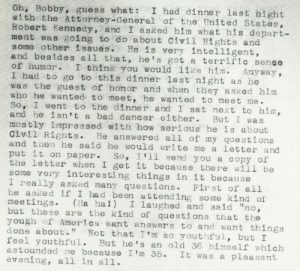 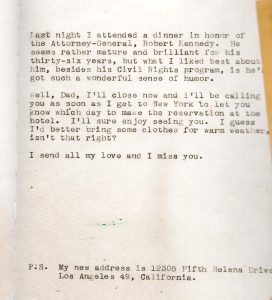 We must ask ourselves: if something inappropriate had occurred that evening, at a dinner party full of guests that included Bobby’s family members, if an illicit affair was beginning, would Marilyn really be writing about it to the father in law and stepson that she adored? 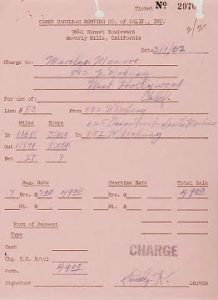 Some have suggested that at the dinner party Marilyn became drunk and needed a ride home, which Bobby obliged to. However, Marilyn’s limo receipt from the evening, showing that she arrived at the party at 8 p.m. and was returned home by her regular driver  Rudy Kautsky at 3 a.m., proves that assertion is false.
So when did Marilyn and Bobby meet up again? There is no evidence supporting them seeing one another until May 19, 1962, when Marilyn famously sang Happy Birthday to President Kennedy at Madison Square Garden. That evening she proudly escorted Isadore Miller to the gala and by all accounts doted on him all evening, saw him home, and then returned to her apartment at 4 a.m., where she had her masseuse Ralph Roberts waiting to give her a massage until she fell asleep. 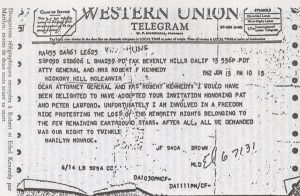 A telegram from Marilyn declining an invitation from Robert and Ethel Kennedy.

In early June, Marilyn was invited to a party to honor Pat and Peter Lawford by both Bobby and his wife Ethel. On June 13, Marilyn sent a telegram declining the invitation addressed to “Attorney General and Mrs. Robert F. Kennedy”.  It seems rather implausible that had there been some sort of affair going on that Bobby and his wife would be inviting Marilyn to a family function.

Some biographers have stated that Marilyn and Bobby met again at the Lawford’s home on June 26, 1962. However, as the schedule of the Attorney General is well documented and his whereabouts reported in the press, we can show that they did not meet on that day either. An article from the Chicago Tribune reports that Bobby had flown into the windy city from Detroit late in the day on the 25th to attend a  conference. It then reported that on Tuesday, June 26, the day he was supposedly with Marilyn Monroe, he was having breakfast with Chicago’s mayor before heading out to Denver that afternoon. Even more discrediting of a June 26 tryst with Marilyn are internal memos from the FBI detailing the attorney general’s travels on that day. …from Illinois to Colorado. 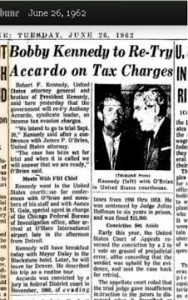 News article placing Bobby Kennedy in Chicago and not with Marilyn. 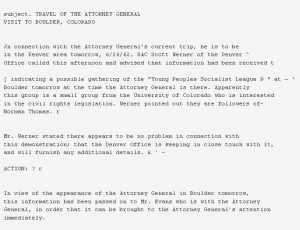 Marilyn has been accused of phoning both the president and the attorney general incessantly from the night of the birthday gala  in May until her death in early August.  There are no calls to Washington appearing on her phone bills for the entire month of May. Her phone records do, however, show  calls to Washington, D.C. in the months of June and July 1962….exactly eight calls, that lasted a few minutes each, placed to the public line at the Attorney General’s office. Not the White House. Not either of the Kennedy’s private phone numbers. None to Massachusetts. Eight calls made to a public line, that Department of Justice staff could easily overhear.  At the time these calls were occurring, Marilyn was going through career troubles at Fox, having been fired and then entering negotiations to resume filming  Something’s Got To Give. Simultaneously, Robert Kennedy had a film in production at Fox Studios. Considering these calls not so coincidentally align with Marilyn’s meetings at the studio, could she perhaps have been calling Bobby to simply ask him to use a little of his clout to help her out with her negotiations? This is what Angie Novello, Bobby’s personal secretary, had to say about these phone calls:

And this brings us back to the letter to Marilyn from Jean Kennedy Smith calling her and Bobby an ”item”.  Most occasions where this letter is quoted conveniently leave out the first few sentences because they certainly cast doubt on any romantic relationship. Here’s what the note says in full:

“Dear Marilyn, Mother asked me to write you and thank you for your sweet note to Daddy-he really enjoyed it and you were very cute to send it. Understand that you and Bobby are the new item! We all think you should come with him when he comes back East! Thanks again for the note-Love, Jean Smith.”

The excised portions certainly put a completely different perspective on it, which explains why they’re excised…..it takes away from a possible scandal. The patriarch of the Kennedy clan, Joe Kennedy, had suffered a stroke and had to undergo months of physical therapy. More than likely, Marilyn had heard about his health issues from her close friend Pat Lawford and sent a get well note, as she was known to be very compassionate to anyone who was ailing. Although we don’t know the date Jean’s note was written, it could have been any time from February to June 1962. This is the time period that people severely lacking in credibility and the authors who believed them reported that there were affairs going on with one or both Kennedy brothers. However, no one can explain why the alleged mistress was being invited to family events (that the wives of both men would have attended), was writing cheerful notes to their father and being thanked for it by their mother and sister.  The reference to Marilyn and Bobby being an ”item” more than likely refers to them amusing dinner party guests by doing the twist at that first meeting back in February. However, these things tend to get overlooked because they don’t support the myths, which in turn doesn’t bring in high book sales or sky rocketing auction bids.

Perpetuating the myth of the Kennedy affair does a grave disservice to all the principals. Instead of John F. Kennedy being remembered as progressive President that symbolized the ideals of our country, he’s painted as a philanderer. Instead of Robert Kennedy being remembered as a brave advocate for civil rights and a doting father to his eleven children, he’s thought of as a cheater who picked up his brother’s discards. And poor Marilyn is the most maligned of all. Instead of being remembered as the sensitive, talented, courageous woman she was, she gets reduced to a caricature that is defined by who people think she may have slept with. By all accounts of those who actually knew them, Marilyn and Bobby were platonic friends with a great deal of respect for each other, and both were more interested in talking politics than anything else. Marilyn and the Kennedys both still have living family members. Imagine how hurtful it must be for them to constantly have to deal with slanderous rumors about their loved ones. Before spreading more rumors, or twisting something out of context in order to support those rumors, think for a moment about the fact that these are not just public figures but real people that are being distorted into something they were not.

Jean Kennedy Smith herself addressed the note when it was first on the auction block in 1994. She said in a statement printed in the New York Post

“The suggestion that the letter verifies an affair is utter nonsense.I am shocked anyone would believe such innuendo about a letter obviously written in jest.”

-by Marijane Gray for Immortal Marilyn