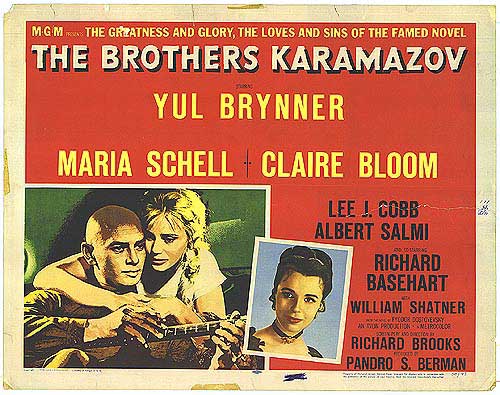 The Brothers Karamazov, the last novel by Russian author Fyodor Dostoyevsky, was published in 1880. It is a story of three brothers who become implicated in the murder of their corrupt father, also named Fyodor.

Dmitri, his eldest son, is a soldier, mired in a life of debauched excess. Ivan is a student, much disturbed by the irrationality of the world, while Alexei, the youngest of the brothers, is an idealistic novice monk. Both Dmitri and his father, Fyodor, fight for the affections of Grushenka, a peasant girl who has risen to the dubious status of courtesan. And in a further twist, Ivan falls for Dmitri’s erstwhile fiancée, the proud and haughty Katerina.

But the plot and characters are only one aspect of Dostoyevsky’s masterpiece, a vehicle for his own religious and philosophical odyssey. While sentenced to hard labour in Siberia for circulating his politically subversive writings, Dostoyevsky had befriended a young man convicted of killing his father to secure an inheritance.

Years later, the man’s conviction was overturned. The incident inspired Dostoyevsky to write The Brothers Karamazov, but as the novel progressed a more personal tragedy took over.Dostoyevsky’s three year-old son, Alyosha, died of epilepsy. Alexei, hero of the novel, was affectionately named Alyosha.

The Brothers Karamazov had already been filmed in Europe when it was first mooted in Hollywood during the late 1940s. Dore Schary, Chief of Production at MGM, bought the rights to the novel and began planning a lavish adaptation. At the same time, a little-known starlet was making the rounds of the studios, taking bit parts in forgettable ‘B’ movies.

In late 1948, Marilyn Monroe met agent Johnny Hyde. He was 52 years old, and she was thirty years his junior. Nonetheless, Johnny was smitten. He left his wife and family, and soon he and Marilyn were the subject of gossip. A photograph of them dancing together shows Marilyn towering over the diminutive Hyde, and she later confessed that she often forgot her place, leading him in the dance.

From the outset, Johnny was convinced that Marilyn had the potential to be a major star. ‘I discovered Lana Turner,’ he told her, ‘and you’re more than she ever was.’ Marilyn took a flashy walk-on role in a Marx Brothers film, Love Happy, and flew to the east coast on a promotional tour. Between public appearances, she secluded herself in hotel rooms, spending hours on the telephone to Johnny, and her acting coach, Natasha Lytess.

Marilyn also liked to read. Sensitive about her lack of formal education (she had left high school early to embark on a short-lived marriage), she spent her spare cash on classic literature and art, and occasionally wrote poetry.

Miller later recalled the incident in his memoir, Timebends. ‘Marilyn Monroe seemed almost ludicrously provocative, a strange bird in the aviary,’ he wrote breathlessly, ‘if only because her dress was so blatantly tight, declaring rather than insinuating that she had brought her body along and that it was the best one in the room.’ Despite his obvious lust for Marilyn, Miller returned to New York, and his marriage.

Meanwhile, Marilyn signed a seven-year contract with Twentieth Century Fox and worked steadily through 1951. She was generally given lightweight roles in mediocre comedies, playing a series of dim-witted secretaries and scheming gold-diggers. When the Korean war erupted, Marilyn was the army’s most popular pin-up.

Off-screen, she took night-classes in literature and continued her acting lessons with Natasha Lytess. As Marilyn’s star rose, the gulf between her public image and private self grew ever wider. But her ambition to play Grushenka had not been forgotten.

Marilyn became Hollywood’s most prominent sex symbol. Films such as Gentlemen Prefer Blondes and The Seven Year Itch were worldwide hits, and her handprints were immortalised in cement outside Grauman’s Chinese Theatre. In 1954, she married the legendary baseball hero, Joe DiMaggio.

But just a few months later, the marriage was over and Marilyn walked out on her lucrative contract with Fox, moving to New York, where she frequented the Actor’s Studio and formed her own production company. She encountered Arthur Miller again, and their romance was rekindled.

Miller’s life, like Marilyn’s, was at a crossroads. As red-baiting swept America, he was questioned by the House Un-American Activities Committee regarding his youthful membership of the Communist Party. It had been a fleeting dalliance, so his own past affiliations were disregarded. But when Miller refused to name other party members, he was charged with contempt of court.

Meanwhile, his marriage had collapsed and rumours of an affair with Marilyn began to spread. In June 1956, following a court appearance, Miller announced his engagement to the world’s most famous woman, Marilyn Monroe.

Marilyn’s intellectual aspirations had long been the object of ridicule. Just a few months before, a journalist had taunted her about her desire ‘to play
The Brothers Karamazov.’

‘I don’t want to play the brothers,’ Marilyn replied with guileless logic that was anything but naïve. ‘I want to play Grushenka. She’s a girl.’ When asked to spell Grushenka, Marilyn laughed. ‘Honey, I couldn’t spell any of the names I’ve been telling you.’

But with an acclaimed role in Bus Stop under her belt, and her impending nuptials to Arthur Miller, it seemed that the tide was finally turning.

Shortly after the wedding, Marilyn travelled to England to film The Prince And The Showgirl with Sir Laurence Olivier. It was a gruelling experience. Olivier had little patience with Marilyn’s intuitive, Method-trained approach to acting, and she felt that her production company was being overruled.

Worse still, her business manager, Milton Greene, and Arthur Miller treated each other with barely-concealed contempt. In the midst of all this conflict, and with Arthur’s looming court battle in mind, Marilyn had little choice but to decline when a British television company offered her the role of Grushenka in another adaptation of The Brothers Karamazov.

Dostoyevsky’s novel finally reached the big screen in 1958, with Austrian actress Maria Schell playing Grushenka, and Yul Brynner as the charismatic Dmitri. The critical reception was muted. Even at two hours, the film seemed truncated and failed to recapture the passion of Dostoyevsky’s text.

Despite her disappointment at losing out on her dream role, Marilyn was generous in her assessment of the film. ‘Maria was wonderful in the part,’ she said.

Marilyn continued to stand by her husband during his trial. Her appearances outside the court in Washington guaranteed positive coverage for Miller, and he was finally acquitted. But Marilyn’s defence of Miller was controversial within Hollywood, and threatened to destroy her career.

‘Those bastards told me to drop Arthur, but I refused,’ she confided to W.J. Weatherby. ‘They’re born cowards and they want you to be like them.’

Marilyn’s transformation from lonely starlet to self-sacrificing wife bears a striking resemblance to Grushenka’s ultimate redemption in The Brothers Karamazov. When Dmitri is charged with his father’s murder, Grushenka realises that her love for him is genuine, and that her ill-treatment of him has played a part in his downfall. She stands by Dmitri in court and is determined to prove his innocence.

By the end of the novel, virtuous Katerina has revealed herself to be deceitful and a hypocrite. But Grushenka finds her own salvation through selfless love for Dmitri. In the same way, Marilyn set aside her own ambitions to support the man she loved, Arthur Miller. But long after The Brothers
Karamazov was released, many of Marilyn’s peers came to believe that Marilyn would have been as good, if not better, than Maria Schell in the role of Grushenka.

Actress Anna Sten, who studied alongside Marilyn at the Actor’s Studio, insisted, ‘She would have been fascinating in it. Fabulous. I could see that from talking with her. That was a searching soul. You see, the other one (Maria Schell), was on the surface only. She’s Russian because she wears a babushka, so she thinks she’s Russian! But Marilyn Monroe was probing and searching into why is Grushenka such as she was? What is there to that woman that makes her a classic character and far above ever so many fascinating characters? Why? Why? What is there? After all, if you put her on half a page, what can you say about her?’

‘It’s because of the depth of it,’ Sten continued. ‘You’ve got to understand such a thing, and Marilyn did. She sought me out at the Studio. She was that kind of person herself. Oh yes, she was very deep and very lovely. I only ever saw her do one thing at the Studio, when she did Anna Christie and everybody is still talking about it, how magnificent she was. She was giving and taking at the same time. That’s a very rare quality. Because usually it’s very one-sided, either you give or you take. But when you give both, then you have the audience with you.’