The Elvis and Marilyn Affair 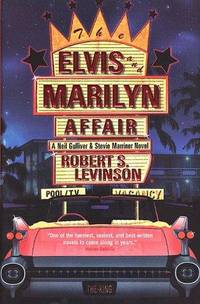 We all know that Marilyn has played muse not only to biographers, poets, artists and filmmakers over the years but novelists as well. Sometimes the results are very good, sometimes pretty good, and sometimes not so good at all. But if you are overwhelmed with the idea of reading yet another biography, tired of thinking through yet another conspiracy theory, and have had it up to here with the names of Slatzer, Carmen, Jordan et al, maybe it’s time you switched to fiction clearly labeled as fiction.

As I say, there’s a lot to choose from, (try finding a copy of Sam Staggs’ “MMII: The Return of Marilyn Monroe” or Doris Grumbach’s “The Missing Person” but stay clear of John Rechy’s “Marilyn’s Daughter”. If you are not up for the heavy-handed drama of Oates’ “Blonde” why not try for something fun, of no consequence, the sort of book they used to call “beach reads”, (meaning something that you can read while listening to the radio and watching the kids and not care if you get sand all over it). A beach read really is a polite term for something that is pure fluff, has no pretensions of art, can be read quickly and forgotten just as quickly: but leave you with a good after taste– kind of like a Doris Day movie.

“The Elvis and Marilyn Affair” is forgettable but fun fluff. The idea is that MM and the Pelvis met up at Fox while she was finishing “Bus Stop” and he was working on “Love Me Tender” and then elaborates on the premise that the two fell hard for one another and carried on a “torrid” affair, (is there any other kind of Hollywood affair?). The myth lived on and people always wondered—was that for real or was the Marilyn and Elvis affair just a publicity ploy? Set in present day, the book’s premise has a Hollywood big wig who has been killed, possibly offed because he might have been in possession of a treasure trove of love letters between Marilyn and the King. Like a lot of beach reads, you’ve just got to let yourself go and enjoy the ride through a convoluted plot and nonsense filled with gumshoes, MM imitators, and lots of movie stars and movie star wannabes.

Sure it’s a thin plot. We’re not talking Fitzgerald or even Danielle Steel. The characters are one dimensional, the page is filled primarily with snappy dialog but more along the lines of one of those Porky movies than anything with Nick and Nora Charles. Again, we’re not talking literature here; one look at the cover and you know this is not going to be anything with “In depth” or “Revealing” on its cover blurbs. It’s fun escapism and takes maybe a few sittings to finish off and forget.

But credit where credit is due, the author has done a bit of research—at least he can accurately describe Westwood Memorial even if he makes a mistake on Marilyn’s crypt marker. But the way I look at it, if the book clearly states THIS IS FICTION, I’ll give the author a bit of slack rather than my usual nitpicking. The trick, sometimes, is just to lighten up and enjoy. We all agree Marilyn should be taken seriously but surely even Marilyn had moments when she just wanted to kick back and be entertained. One of my favorite lines is when she said sometimes her brain got real starved. But ya know, there are times when candy just sounds a lot better than something healthy.

Summer’s upon us and sometimes even the most devoted Marilyn fan just needs something to read that requires very little exercise of the old gray matter. And if you happen to live far, far away from anything remotely sandy, you can always turn all the lights up high in the living room, stretch out on a terry cloth towel and strip down to your bathing suit and pretend. Actually that sounds kind of fun.