Blonde is Fiction: Hollywood To Get It Wrong Again, This Time Through Netflix

Many in the Marilyn community will have already heard that yet another movie based on Marilyn’s life is in the works – another adaptation of Joyce Carol Oates’ Blonde.  Already made as a miniseries in 2002, the book is now spawning a second version, this time at Netflix.

The biggest problem with Blonde is not that it’s completely inaccurate.  In fact, no one should expect it to be accurate.  Why?  Because it’s a novel – it’s fiction.  It was never presented as anything else by the publisher.  And yet…here we go again.  The world at large is assuming that it’s Marilyn’s true story, and that is the biggest problem with Blonde and its adaptations..  You’d think that with just a little research it would become obvious that it’s a fictional movie based on a fictional novel, but in the world of internet publishing, research and truth are, as usual, optional.

Case in point, this story over at Moviepilot that runs with the idea that perhaps Blonde will finally tell Marilyn’s true story.  Here’s another internet writer calling it a biopic.  And yet another one, again referring to it as a biopic.  A biopic is a biographical movie.  Blonde is not biographical; it’s fiction.  Did I say that already?  It bears repeating.

And really, it’s easy to see how people believe it’s a biography, even though Oates is a fiction writer and a well-known one at that.  A quick search for the book returns a load of Google images featuring covers of the book that show Marilyn’s image.  Although the original book cover doesn’t show Marilyn’s face and clearly states it’s a novel, things have gotten murkier in later editions. 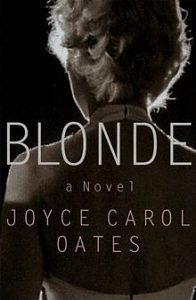 The original cover for Blonde, stating “A Novel” clearly.

Here’s the original cover, which shows what appears to be the back of Marilyn’s head during filming of The Seven Year Itch skirt scene, pretty recognizable to any fan.  However, it states “A Novel” in big letters.

From here, it gets less obvious that the book is fiction.  An updated cover moves “A Novel” into smaller letters and uses another familiar image of Marilyn, although her face is still not seen.

Then, multiple editions, particularly foreign ones, just give up entirely pretending it’s not about Marilyn.  The words “A Novel” are long gone and a wide variety of Marilyn images are used.  No wonder people think it’s a biography. 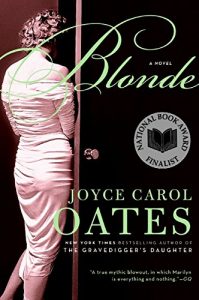 The words “A Novel” become smaller. 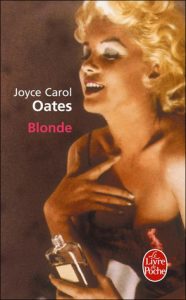 One of the most famous photos of Marilyn used here. 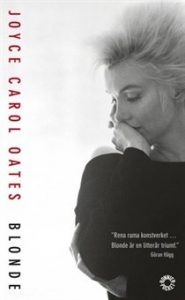 This one features a famous photo of Marilyn by Bert Stern.

There’s plenty of fiction based on Marilyn’s life out there.  Love it or hate it, it’s Marilyn’s appeal that keeps writers interested in using her story to inspire their own work.  The big problem isn’t with the writing of fiction, but with the lack of effort put into making sure the public knows it’s fiction.

Marilyn’s fans already spend a great deal of their time educating people on the truth behind the tabloid nonsense that has been sold about Marilyn time and again.  It’s hard enough to respond to all the lies that have been told in actual biographies, never mind fiction.  But here we are again – Netflix is taking on a project that has been in the works for some time – previously with Naomi Watts attached to star, then Jessica Chastain, although no one knows who will take the role this time.  Once again, Marilyn’s story will be told wrong, and the public will take it at face value.

Is it too much to ask that a reputable biography be used to make a truthful biopic about Marilyn?  Apparently so.  Not only does the public prefer the sensational tabloid trash, they also apparently prefer straight-up fiction.

All we can do as Marilyn fans is spread the word – Blonde is fiction.  Please, oh internet writers, stop referring to it as a biopic.  It’s not a biopic.  It’s just a fictional movie based on someone’s imagination of a life like Marilyn’s.  Marilyn deserves better than to have her life story told as fiction, when no one yet has managed to tell her truth on the screen.