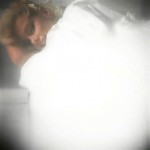 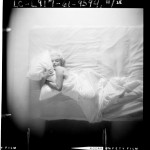 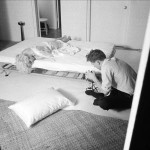 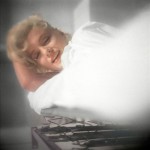 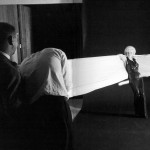 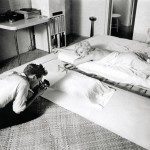 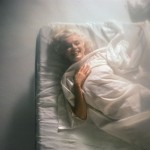 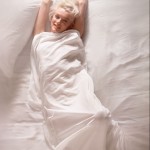 On the evening November 17th, 1961, in Los Angeles , Douglas Kirkland photographed Marilyn Monroe. He was a freshman photographer, 24 years old with a huge crush on Marilyn (like most men had), on his first major assignment for “Look” magazine, and Marilyn was Hollywood ’s sexiest star. She was 35 years old, and this was just one year before her untimely death.

The photo session was being taken for Look Magazines 25th Anniversary cover. Douglas Kirkland photographed Marilyn in the intimate confines of an unmade bed. The result is a series of some of the most spontaneous and beguiling photographs ever taken of Marilyn.

Kirkland had no way of knowing that this was to be one of the last shoots Marilyn would ever sit for. Though he had acquired a reputation at Look as a go-to guy after well received shoots of Elizabeth Taylor and Marlene Dietrich, by his own admission Kirkland acknowledges that he was thrown into the deep end in every way by Marilyn.

“I was a mess.. a mess. There I was, a kid in my mid twenties, trying to make my mark, trying to imagine some way to approach the biggest star in the world in an entirely new way. It obviously had to be eye-catching, but I wanted a more overt and honest depiction of her than perhaps she was accustomed to showing. Being Canadian in principle and Midwestern in culture though, it wasn’t easy to form the words ‘Marilyn.. I want you undressed.’” – Douglas  Kirkland

She had a few requirements… if the shoot was to be in bed then the sheets had to be silk, Dom Perignon must be at the ready, and Frank Sinatra must be playing on the turntable.

Marilyn arrived 3 hours late to the no-frills studio in Hollywood . She giggled and joked with Kirkland , maybe sensing his anxiety. Then she disappeared for a moment and returned wearing nothing but a robe and slipped it off hoping into the bed. There was no strobe light, just a simple steady floodlight that helped produce the lateral shadows. Kirkland photographed Marilyn while dangling from a railing above her. What Kirkland ended up with was a series of dreamy, intimate and legendary images of Marilyn. Marilyn twisted and turned, smiled and laughed, and sometimes even acted bashful by glancing away from the camera, and sometimes the opposite.. staring directly into the camera.

Many year’s later after the shoot, in just recent years, Kirkland has now come out saying that Marilyn asked him to get into bed with her, while the crew left
them two alone, and that he passed up an opportunity of a lifetime by fighting this temptation…

Here are some quotes by Kirkland on the photo session & Marilyn :

Douglas Kirkland, who was born in Toronto, Canada, spent much of his early professional life working in New York, before relocating to Los Angeles in the mid-1970s. Kirkland’s career started quickly when he joined Look Magazine in his early twenties, and later Life during the golden age of 1960’s and 1970’s photo journalism. Among his assignments were essays on Greece and Lebanon as well as fashion and celebrity work, photographing Marilyn Monroe, Elizabeth Taylor and Marlene Dietrich among others.

Through the years, Douglas Kirkland has worked with some of the greatest film stars and probably the most famous being the late Marilyn Monroe. He has worked on the sets of over one hundred motion pictures. Among them, Butch Cassidy and the Sundance Kid, 2001, True Lies, Out of Africa, and most recently Titanic. A book of Kirkland’s celebrity work, ‘Light Years’ was published by Thames and Hudson in 1989 followed by ICONS, Creativity with Camera and Computer, by Collins San Francisco in 1993. Some of the subjects interpreted in ICONS were Dustin Hoffman, Robert Redford, Kim Basinger, Sean Connery, Robert DeNiro and Dr. Stephen Hawking.

In 1997 Kirkland has had four new books published, two in Italy from Mondadori; Legends and Body Stories, plus James Cameron’s Titanic, Harper Collins USA, and Woza Africa, for the International Red Cross, Geneva. Douglas Kirkland is known for his commercial photography as well as fine arts work and continues to be widely exhibited through Asia, Europe and the United States.

“It was still early on that evening of the 17th of November, 1961, as my watch ticked off the seconds and I waited for her to arrive. My nerves were on a razor’s edge. Imagine me waiting for….. Marilyn.” – Douglas Kirkland

“She lived with cameras, had to have a relationship with them in order to succeed in her career, but I’ve never felt this particular band of excitement before with anyone I’ve photographed. I wondered, was she seducing me, the lens or both of us?” – Douglas Kirkland

“I didn’t refuse her with any great wisdom, though in the end I think that the shoot would never have been the same had I complied with her wish (going to bed with her). The images I think are better because of it. Here was this woman who was very misunderstood and exploited, yet she managed to retain such sweetness and innocence. Both are so apparent in the shots. Before the crew returned we were obviously in very different places, what struck me was  that we were just two people trying to make our careers work.” – Douglas Kirkland