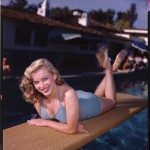 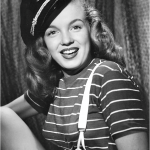 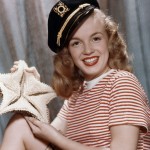 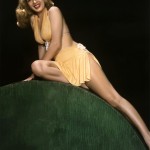 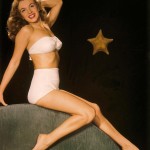 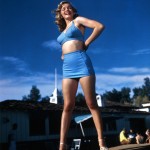 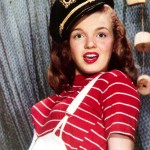 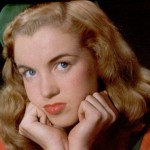 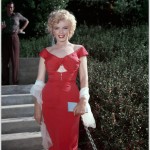 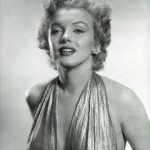 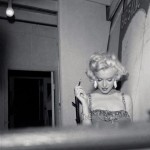 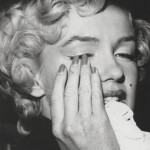 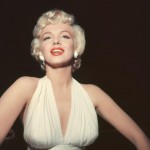 Bruno Bernard Sommerfeld was Jewish and born in Nazi Germany. His childhood was spent growing up in the orphanages of Berlin and seeing the torture created by Nazi’s. As he grew older he became the leader in the underground Jewish Youth Organization. He shortly after escaped to Rio de Janeiro and was then opened up to the world of movies, becoming a very skilled photographer soon thereafter. He would go to the Ufa Palace Movie house and was captivated by Gable and Tracy in San Francisco (where they faced earthquakes and fire).  This movie made him change his destination, and he moved to Berkley, California, where he could complete his work.

He had little money, but managed to open his fist darkroom in his basement in 1940, he now resided in Hollywood. Bruno Bernard brought a new meaning of glamour to his pictures in the photographs he took, the new look of “pin-up photography”. He was able to establish himself very well in Hollywood, and in the 1940’s he became one of the most famous photographers. He was able to open his own studio on Sunset Boulevard, where celebrities visiting would come to his studio to have their pictures taken. Among these celebrities were Gregory Peck, Elvis Presley, Clark Gable, Ginger Rogers, Elizabeth Taylor, John Wayne and more. He also photographed Strippers, Vegas Showgirls, and numerous starlets. Bruno Bernard was successfully known as Bernard of Hollywood.

He would open studios in Palm Springs, Laguna Beach and Las Vegas.

Another event also makes Bernard stand out, besides his photography. He is claimed to have been one of the first photographers who discovered Marilyn Monroe, and photographed her while she was still called Norma Jeane. His photographs of Marilyn graced the covers of numerous 1950’s magazines, which now sell for $100.00’s of dollars.

During Bernard’s lifetime he was honored with 50-year retrospective of 150 of his legendary photo’s, including the famous Marilyn Monroe skirt scene from the Seven Year Itch, by the Academy of Motion Picture Arts and Sciences.  Also the Seven Year Itch skirt series was chosen by Museum of Modern Art in New York as their signature image for the 1999 exhibition “Fame After Photography.”

Today Bernard is remembered as the man who immortalized and mastered the art of pin-up photography. He has been called “Kind of Glamour” and “Rembrandt of Photography.” He lived a very fulfilled life, and had a daughter Susan Bernard – who currently is in charge of his photographs.
His website can be viewed at Bernard Of Hollywood

Marilyn first met Bruno Bernard in 1946. It is said that they met by passing one another while Bernard was leaving a dentist appointment. Norma Jeane would stare up at the sign outside his studio, reading “Bernard of Hollywood”. She asked Bernard if he thought she could be a model, his short reply was “Yes”. This year would be a year of transition for NJ, and Bernard felt this was their connection – him being there to photograph and share this with her. His thoughts on NJ were – “While nature has been generous to her figure, her face is just that of any pretty girl her age, very much like the girl next door. With the exception of her translucent skin, her waiflike innocence, the helplessness underneath.” However, he loved to photograph her, saying that no other he photographed was at ease in front of the camera like NJ was. “Concentration, projection and synchronization are second nature to her” he wrote in his journal.

Bernard saw himself as a big brother to NJ, whom she called Bernie. She had told him that she was looking for a human being with whom she could discuss hopes and dreams, and problems, someone who would not take advantage of her. They had a close friendship, she confided in Bernard like a father.

Something interesting Bernard thought of NJ was her ability to slip into other peoples getups and characteristics…“She is a self taught expert mimic” he would say. Furthermore, he felt if she were to become an actress this would be a problem. He also thought she was in desperate need of a female role model.

By late 1946 Bernard had put NJ on several covers. However, it didn’t make NJ as happy as she thought. She had told him that it was sort of boring after a while, she wanted to be an actress.

Bruno Bernard feels he’s partly responsible for NJ getting a screen test with 20th Century Fox. He had sent his friend Ben some photos of NJ that they were completely impressed with. They set up the screen test with Zanuck, head of 20th Century, and asked it to be a silent one (Bernard was afraid of NJ’s high pitched voice) and made sure it was filmed in color. This worked, and NJ was in. She soon had her name changed to Marilyn Monroe (Bernard likes to take part of the responsibility of helping Marilyn with the Monroe part). Marilyn was very happy – her dreams were coming true. She told Bernard she’d never forget it started with him.

Shortly after all this Marilyn was dropped by Fox, and wouldn’t return calls to Bernard, she would sit alone crying. Bernard felt that she was trying to be Betty Grable, imitating her poses, and that she wasn’t ready for Hollywood’s buildup. Therefore, he introduced her to drama coach, Natasha Lytess. Natasha became like a surrogate mother to MM, Bernard would say, he also felt that she gave Marilyn the training and support she needed.

Later in 1950 while Bernard was photographing some cheesecakes photos of Marilyn, on a diving board in platform shoes and a body hugging 2 piece bathing suit, she met Johnny Hyde (who Bernard was not fond of at first). Shortly after Johnny and MM became very close and he asked Bernard not to take “cheesecake or 2 piece bathing suit shots of Marilyn anymore”. Bernard thought this odd since this is what attracted him to her some months earlier. Johnny insisted he was making MM into a serious actress, and he landed her a role in the film “Asphalt Jungle”, and also left her with a 7 year contract before he died.

Marilyn’s career started to pick up and she was happy again. Seeing her name up lights was one of the most exciting things to her, even though she had wished the name read Norma Jeane. Bernard squeezed her hand when she had one of her first big press conferences, telling her “to be Norma Jeane.” She told the press of her upbringing in orphanages, of the Tom Kelley calendar shoot, of having no money… the press adored her, and the world adopted her as a little sister according to Bernard. Marilyn’s career was moving, and Bernard released his first book titled “Pin-ups” in which he featured pictures of Norma Jeane. He presented Marilyn with the first copy, and she looked onto NJ as a stranger.

Marilyn’s life was happy for a while, she was making films…had her hands cemented at Graumans Chinese Theater, and dating baseball player Joe DiMaggio.

Then came her marriage to Joe. Marilyn wrote Bernard on their honeymoon in Japan. She told him of the nice time they were having, how wonderful Joe was, and she also told him how after her next film she only wanted to make 2 more and retire as an actress. She wanted to give Joe a family that he wanted so badly. On her honeymoon she was invited to sing in Korea. Bernard would call this “the creation of Marilyn herself”…she was not performing as any character, just herself. She loved it.

Marilyn’s next big film was the SYI. Bernard had been asked by Redbook Magazine to be one of the photographers for the skirt blowing scene. He did not want to photograph this, he didn’t like fighting in crowds, leaving Hollywood, and was supposed to be shooting Marlene Dietrich’s opening in Las Vegas. With constant pushing from Redbook Bernard went. What he saw was 3 hours of waiting – people yelling, Marilyn finally appearing, her skirt blowing way over her head and Joe in the distance (with Walter Winchell) embarrassed and angry. Bernard tried getting to Joe to calm him, but Joe raced off before he had the chance. During make up touch ups Bernard told Marilyn not to sign with Milton Greene on MM productions. That she would lose with Joe who was her moral Support, like his wife and Susan were to him. That evening Bernard went up to their suite to see about a picture of the two for the cover, when he arrived he heard screaming and crying, and left. His article was not published by Redbook.

The scene was re-shot back in Hollywood and Marilyn only wanted Bernard to be the photographer there this time. He drove to the Fox studio on the day this was supposed to be filmed only to find that nothing was happening. He drove home that day down Palm Drive confused and discouraged when he saw a mob of press at Joe’s home. He found out that Marilyn was announcing their divorce. She came out of the house crying, this is when Bernard took the picture he called “the naked human creature behind the Goddess.”

In 1955 Marilyn moved to NY. She found a new love for acting their and joined Lee Strasberg’s Actors Studio. She felt a part of their family she told Bernard when speaking with him, he told her that “there’s a difference between friendship and the attitude of the Strasbergs, who make you believe you belong to them”.[/vc_column_text][/vc_column][/vc_row][vc_row][vc_column width=”1/1″][vc_column_text]