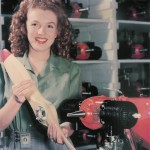 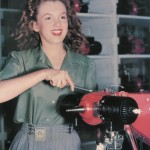 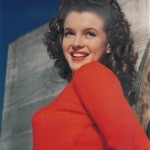 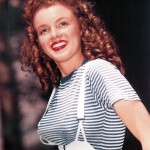 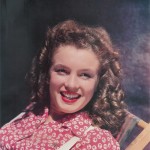 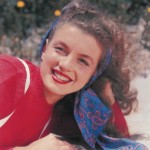 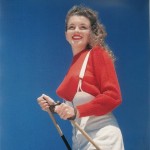 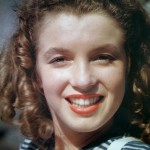 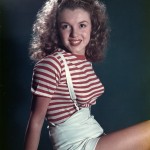 [/vc_column_text][/vc_column][/vc_row][vc_row][vc_column width=”1/1″ animation=”none” column_padding=”no-extra-padding” column_padding_position=”all” background_color_opacity=”1″][vc_column_text]David Conover was an author and photojournalist, who some will credit with discovering Marilyn. He was born in Missouri on June 26th, 1919 and died in December of 1983. In 1946 he moved to Wallace Island, set up home and stayed there up until his death.

In 1945 David was an army photographer for the US Army’s 1st Motion Picture Unit. Captain Ronal Regan was his Commanding Officer. He instructed David to go on a routine assignment to take pictures of women in war work at the Radio Plane Factory in Van Nuys, California.  One of his photo shoots was to photograph women working on the assembly line engaged in the war effort at the Factory. He could not believe his eyes when he noticed Norma Jeane with a spray can in hand. With the factory foreman they moved to a more appropriate location where small engines for remote controlled target aircraft were assembled. These pictures show Norma Jeane with a propeller in her hand. Norma Jeane was overjoyed when David expressed his interest in taking some color shots of her, and so over the next few weeks he commuted from Culver City to Radio Plane.

From Conover’s Journal he writes:

June 28th, 1945 – After parade duty I picked up my film at Eastman. The guy asked me who my model was – that she was a humdinger! I showed the shots to Norma Jeane this evening. She liked them tremendously, and I think she was excited about them as much as I.

…Norma Jeane wants to be a movie star. (Seems everybody does these days – ha!) I told her she would have to be a model first, and to think
about it.

David Conover wrote in his journal of Norma Jeane, who was 19 at the time that they met, “Could I be falling in Love?”. To get to know his 19 year old model whom he was greatly attracted to, Conover took her on a two-week shooting expedition in the hills of Southern California. Immediately on their return Conover was shipped overseas, and the two lost touch for some time. It would not be until January of 1953 that they would meet again, then she would be Marilyn Monroe.

These early photographs taken by David Conover are to be known as Norma Jeanes first step up the ladder to stardom and David went on to recommend her to many other well known photographers, such as commercial photographer Potter Hueth, whom she also did some modeling for. It was Hueth who later showed pictures of her to Emmeline Snively of the Blue Book Modeling Agency.

Norma Jeane’s first magazine cover was the popular Yank magazine in 1945, or Douglas Air Review in January 1946, depending on sources. Each cover photo taken by David Conover.

Conover wrote that what captivated him was “a luminous quality in her face, a fragility combined with astonishing vibrancy”.

David claims in his book ‘Finding Marilyn’ that during the summer of 1945 while they toured California for a dramatic background to use for a photo shoot, that Norma Jeane seduced him and they became lovers. We only have his word that this happened, as Norma Jeane wrote in a letter to Grace Goddard dated June 4th of the same year , that “He (David) is awfully nice and is married, and it is strictly business, which is the way I like it. Jimmie seems to like the idea of me modeling so I’m glad about that.” This obviously contradicts his claim and makes him seem as yet another man who met her and is trying to jump on the Marilyn bandwagon.

The next time Marilyn was to meet up with David Conover was on the set of Gentlemen prefer Blondes in 1953. By this time Marilyn had been making newspaper headlines and had become quite a big star. Conover had been reading about Marilyn in magazines and newspapers during the time they lost touch. He was ready to meet up with her again and arranged a joyous reunion on the set of her film ‘Gentlemen Prefer Blondes.’ It was during this meeting that she confided in him about the many things in show business that already bothered her. The scripts she was given, saying “They don’t think I can act, so I’m stuck playing the sextress.” The two kept a friendship going over the years.

Text is from ‘Finding Marilyn’ by David Conover, and the Marilyn Encyclopedia.[/vc_column_text][/vc_column][/vc_row][vc_row][vc_column width=”1/1″]

“There was a luminous quality to her face,a fragility combined with astonishing vibrancy.”– David Conover

“Yes, I always knew the camera was kind to me. I thought of it as my friend. It was because of David Conover that I found that out. Might say he was the first of photographers that couldn’t wait to flap their shutters at my body. He sold a lot of me to Yank magazine and that was my first big break. Didn’t mind at all going off on weekends with him and shooting outdoor shots.”  – Marilyn Monroe

“I never thought of her as a sex goddess or a movie queen. She was a woman, sometimes frightened, often confused; a woman who in many ways was still a child, who with courage was learning to reach out and grow, to mature as an individual and in her art.” – David Conover