Is it a “Marilyn book”? Not really, but there is a short piece on her. Is that any good? Depends whether you like Truman Capote or not. A lot of folks do. But an equal number can’t stand the guy.

If there were a list created that named one hundred of the most memorable characters of the 20th century, Truman Capote would likely be in the top ten. If you are not old enough to remember his appearances on the Tonight Show or his famous/infamous masked ball, then you missed out on quite a lot. Without Capote the character, the man who either grated on people’s nerves, (and made them plenty nervous), or could boast of fans as devoted as Marilyn’s, all that is left are his words. And that perhaps is not a bad thing. I have a friend who to this day refuses to read Capote simply because he can’t stand the guy who used to show up on Johnny Carson fully equipped with all of the stereotypical mincing moves and that high pitched voice that sounded like a homophobic comic trying to imitate a gay man.

But the thing with Capote was he was SO outlandish, that voice so falsetto and his attitude one big “I don’t give a sh**”, that you couldn’t help but love him. He wasn’t PC, but he thrived on being a celebrity and when his words dried up and all that was left was the celebrity, he played it for all it was worth and more power to him. Maybe now that he is dead and the memory of that voice, (seriously– you think Evelyn Moriarty has a funny way of talking?), has faded away, more people will turn to the work he left behind and realize what an incredible artist the guy was. The funny thing about Capote is that he is remembered primarily for “In Cold Blood”, the one book of his that was a huge bestseller. I say funny because that book, which I admit is phenomenal, is so different than anything else the man wrote. “Other Voices, Other Rooms”, “The Gras Harp”, even “A Christmas Memory” are works that are closer to poetry than standard fiction. 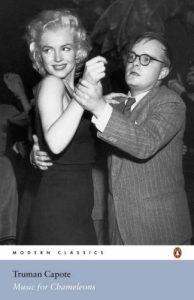 But what does this have to do with Marilyn? Simple. A collection of his essays issued in 1980 includes a piece called “A Beautiful Child”, a small memory work that focuses on the afternoon he and Marilyn spent together following Constance Collier’s funeral in April 1955. April 28, 1955 to be exact, as he informs the reader in the very first line.

Capote might be a great writer but you really wouldn’t know it from this short piece. That’s not to say it isn’t enjoyable but after the first few pages, the rest is written up as if it were dialog from a play–

TC: You want to go home?

And for the diehard MM fan, Capote proves he hasn’t done his research when in the third paragraph he states that Asphalt Jungle was Marilyn’s “first speaking part”. But who cares, right? What I want in a MM memory, (and I assume you too), is that it provide me with a glimpse into Marilyn’s life and I’d like to learn something new. On those counts, “A Beautiful Child” does not disappoint. I had never heard of Marilyn having studied with Constance Collier, let alone that she had attended her funeral.

So then there’s the question– as Capote presents everything as dialog– does this “sound” like Marilyn? Up to you. As much as I like to think I know Marilyn, reading her words here, (or at least her words as Capote recalls them), it doesn’t sound like the Marilyn I thought I knew. Capote, when asked by Marilyn what Elizabeth Taylor is like, answers “Well, a little like you, she wears her heart on her sleeve and talks salty.” So maybe Marilyn did have a mouth on her. I never met the woman and have only heard her speak words written for her or talking with Richard Meryman. But be forewarned– if you don’t like your Marilyn “salty”, don’t read “Music for Chameleons“.

What is worth the price of the book is the one page where Capote has Constance Collier speaking about Marilyn. That’s where the description “a beautiful child” comes in. She likens Marilyn to Greta Garbo and makes a very convincing case. The admiration of the aging Shakespearean actress for Monroe is evident, especially when you read that she had been working with Marilyn on doing Ophelia. The things we missed being born when we were and not traveling in the right circles, eh?.

As for the book and as for “A Beautiful Child”, I think this is one that is going to be up to you if you want to seek it out or not. Me, I love Capote, so the question was a no-brainer. But if you want to read only about Marilyn, I don’t know if you’d like it or not. Capote was a character. But the character he presents here as Marilyn, I’m not sure it is one we would recognize.

If you would prefer another Capote work to get a true feel for Marilyn as well as Capote’s thoughts about her, find a copy of the short novel, “Breakfast at Tiffany’s”, written with Marilyn in mind. It’s odd but Holy Golightly feels much more like the Marilyn I think I know than the Marilyn Monroe of “A Beautiful Child”.

One last thought–  If ever there was ever a doubt Marilyn’s popularity, (and ability to sell), “Music for Chameleons” provided proof a few years back when I was in Italy. The book had been reissued and the new paperback caught my eye immediately when I saw it in a bookshop window– not because it was Capote but because the entire cover of the book was a black and white photo of Marilyn. “A Beautiful Child” is only 19 pages long, yet the publisher was relying on MM to sell the whole book.